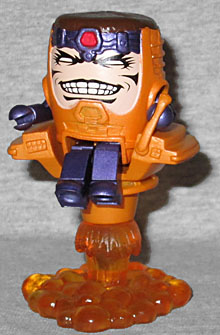 Formerly an ordinary human, George Tarleton was transformed into a Mental Organism Designed Only for Killing (M.O.D.O.K.) during an experiment by Advanced Idea Mechanics (A.I.M.). Calling himself the Scientist Supreme, he is capable of various types of attacks and also has superhuman calculating ability.

Oh man, a MODOK Minimate! How cool is that? There's a real Minimate body under there, but the majority of his body/giant head is a new mold, because how the hell else would you ever make it? He still looks like a Minimate, and that's what matters. His body is separate from his chair, and there's a notch in his butt to help hold him in it. His little arm can hold the control stick, and the exhaust cloud plugs in to hold him up.

Akuma is a fighter who took on the name of "Master of the Fist," and seeks a true battle to the death with Ryu. While his basic fighting style 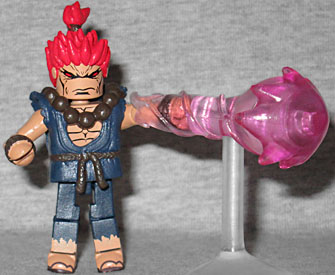 is based on Ansatsuken, the same as Ryu, Akuma seeks to lead Ryu down the path of his own fighting style, the "Satsui no Hadou," in order to make him into a worthy opponent.

Akuma is wearing a dark blue gi with torn sleeves and a heavy beaded necklace molded as part of it. He protects his hands not with gloves, but with wrapped ropes, and there are sandals painted on his feet. His face is covered in lines, and his spiky red hair is pulled into a pointy top-knot. He comes with a pink hadoken fireball, with a flight stand to help hold it up (just like Ryu had).
Previous | Next