Thor is the son of Odin, ruler of the home of the gods, Asgard. 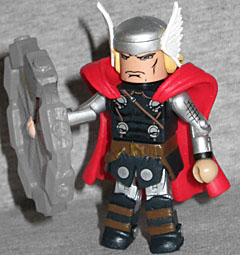 Currently a member of the Avengers, Thor excels at hand-to-hand combat and possesses other-wordly stamina and superhuman strength. He also weilds Mjolnir, a hammer that allows him to command the powers of the storm: wind, rain and lightning.

This figure is wearing the same costume as Thor Reborn, but instead of having a big, bulky chest cap, the details are just painted on his torso. It works much better. His skirt and bootfronts are new pieces, and amazingly, so are his helmet and cape. Seriously? Wow! The arms and legs are silver, but the "armor" paint on them is kind of sparse. He not only comes with plain Mjolnir, he's also got one of the cool swirling versions.

100 years ago, the Sun God Amaterasu lost her physical form due to injuries sustained in battle. Her spirit was sealed within a statue, and she was 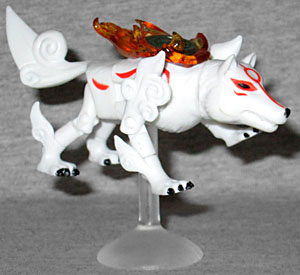 later resurrected and set out to regain her powers and restore beauty to Nippon. She looks like an ordinary wolf, but she is able to perform 13 types of miracles with her Celestial Brush.

Wow, is there any character less likely to get a Minimate than Okami's Amaterasu? While previous Minimate dogs used legs as... their legs... Amaterasu uses arms. They make her look slender and athletic, like a wolf should be. The "shoulders" are new, sculpted with smirling clouds on them, matching all four feet and the tail. Her starting weapon, Divine Retribution, is attached to her back, and there's a hole in her sternum to accommodate a flight stand.

The Thor in this set has some advantages over the previous release of this costume, but isn't a must-buy. Okami, however, is a lot of fun. When the wolf howls in the moonlight, that means it's "go" time; really, really "go" time.
Previous