Remember back in 2011 when we got the chance to vote for the figures that would be in the Heralds of Galactus box set? Well, the opportunity is back again, this time focused on Marvel's Infinity event from last year. 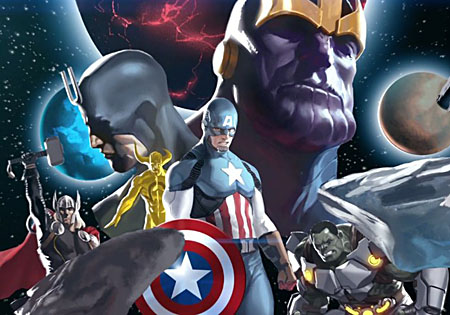 Due to the events of Age of Ultron, Thanos declared that Earth must be destroyed, and so sends his army against the planet - but being Thanos, he secretly has other motives than the ones he initially claims. Diamond Select Toys is going to produce and all-new Marvel Minimates box set based on the crossover, and right now you get to pick who's in it!

The box set will be available this fall exclusively at Toys Я Us stores and online at Toysrus.com, and will include four different Minimates. You'll get to pick which four by casting your vote below. Pick four out of the six possible characters - Captain America, Hulk, Iron Man, Thanos, Thane and Ronan - and the four with the highest number of votes will be included in the box set! Check out the control art below, and get voting!