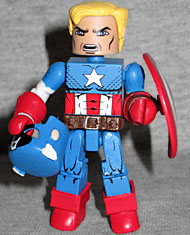 of justice makes him one of the most respected heroes today, and the ideal leader of the Avengers. Extremely proficient in boxing, judo, aikido, and various other fighting disciplines, he is also skilled with his one-of-a-kind shield, made from vibranium alloy.

This is just a nice, solid Captain America. Nothing really "special," per se - sparsely painted armor, a bit of anatomy, a fancy belt, a shield that connects to his left glove, all that stuff. If you don't have an army of Minimate Captains America, this is a fine offering. He's got an angry face and replacement hair, if you want to take his mask off.

Ryu's name gained great recognition among martial artists after he defeated the Muay Thai king in a fight. He now wanders the globe, 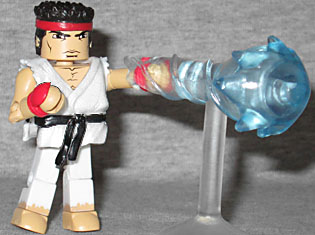 hoping to become a true warrior by engaging in battles with fighters he meets along the way. In addition to his unique fighting style, he is also able to focus his spiritual energy.

If the First Appearance Ryu in Series 2 wasn't enough for you, here's the real deal! The gi he's waering is a new mold, with tattered sleeves. He's also painted with torn pantlegs and no shoes. His gloves are smaller, sticking just to the backs of his hands, and his black hair is pushed up by his red headband. Like the previous figure, he has his blue hadoken and a stand to hold it up.
Previous | Next