In 2012, the Disney Store got two exclusive Avengers-themed Minimates box sets. They were released at the same time, so we're just going to combine them into one massive (mini-)review.

Puny Steve Rogers was injected with the super-soldier formula to become the US military's secret weapon in World War II. Frozen in the ice following 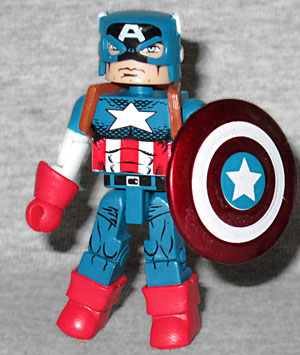 a fall into arctic waters, Cap was thawed out years later and immediately inducted into the Avengers, where he quickly became the team's leader.

Captain America is wearing a pretty standard version of his costume: blue suit with chainmail on the chest, white sleeves, stripes around the abdomen, and red gloves and boots. The blue is a bit closer to turquoise than plain blue, but it works with the costume. There are scaly sections on his chest and shoulders, to suggest his armor, but the only detail on his back is the large white star. There are muscles painted on the front of his legs, but not around the sides or back. Similarly, he's got a six-pack on his abs, and a shadow on his forehead (to help the A stand out better). He comes with his shield, of course; it's done in metallic red, and can either plug onto his glove, or the harness on his back.

Caught in a gamma bomb test, Dr. Bruce Banner found that the radiation had affected him on a genetic level, and that moments of stress or anger 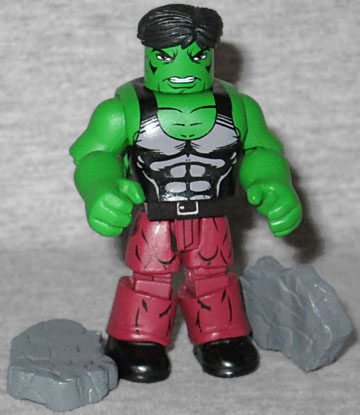 transformed him into the monstrous Hulk. While he fought alongside the Avengers early on, the team has had to battle their savage friend on more than one occasion.

Next we've got Hulk. But not just any Hulk, Smart Hulk! The previous Smart Hulk was okay, but this one is better. He still gets a large chest cap (just painted with a black tank top, not a sculpted jacket), but he also has the larger arms and legs to go with it. His hair is a separate piece this time, not molded as part of the head, but it's kind of a shame that the green used for this figure isn't the same as the green used for that one: if it were, you could swap heads to create whatever appearance you liked. The set includes two chunks of pavement that we assume are supposed to be accessories for Hulk? 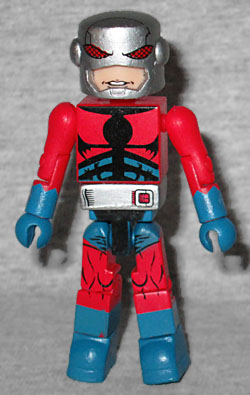 Brilliant scientist Hank Pym is famous for his discovery of Pym Particles, subatomic particles that can increase or decrease an object's size. In his time with the Avengers, he as used them under a number of superhero identities, including Ant-Man, Giant-Man, Yellowjacket and Goliath.

The first Giant-Man was okay, but there was room for improvement. This one doesn't have a "powerhouse" chest, but it does have plenty of height, thanks to a waist extender, a thick belt, and Frankenstein's big boots. He also has his modern helmet, though the figure's face seems to have been painted too low on the head, so it in no way properly lines up with the helmet. It's so bad, I had to shave a little plastic off the top of the head to get the helmet to sit down far enough to even leave his mouth visible. 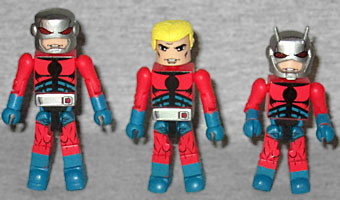 The figure also comes with enough pieces to turn him into Ant-Man: a second helmet (with antennae) and a normal pair of feet. If that's still not small enough, you can take the belt off entirely, and give him the third pair of feet included with the set - these being the shorter "slipper" feet. It may not sound like much, but the differences between Giant-Man and Ant-Man are appreciable. 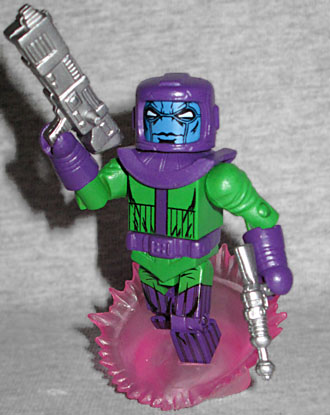 Captain America, the Hulk and Giant-Man are three of the Avengers' mightiest heroes, and have long protected Earth from the evil of others, including the malevolent time-traveller known as Kang!

So the first three figures we've reviewed were also available in Series 44, but Kang could only be had in this box set. And now you know why I bought it. Other than the Age of Apocalypse shoulders, all his sculpted pieces are new - his helmet, collar and skirt. His face, chest and legs are painted with plenty of details, and he's armed with two futuristic weapons: Cable's square gun, and the Kronan Stone Man's ray gun. Then there's a pink version of Magik's base - probably a time portal.

And now, for the second box set! 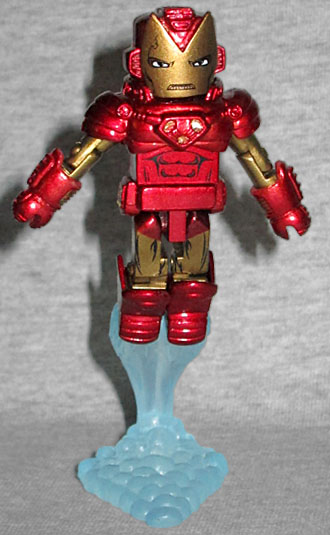 After building his high tech suit of armor to help him escape captivity, billionaire industrialist Tony Stark improved on his designs to become a costumed hero. Teaming up with like-minded heroes to form the Avengers, Stark is also the team's main financial backer.

Both these sets are based on the "Heroes Return" era, aka "when Marvel got their books back after foolishly farming them out to the Image Comics guys," and no figure makes that more obvious than Iron Man. On the timeline, this suit falls between the Prometheum Armor and the "Modern Armor" armor, and was only worn for about three years (real time). And rather amazingly, this is the first time it's been made into an action figure of any sort! Shame, since it's a really cool design (by Alex Ross, no less).

The idea was to make Iron Man look more like an actual knight, so the armor is larger around the chest and shoulders, which this figure deals with by giving him a chest cap that only comes down about nipple-high. He gets a big belt, plus gloves and boots, and the entire helmet can be removed to reveal Tony's face. The set includes a blue flight stand for him.

Known on Earth as the fabled Norse God of Thunder, 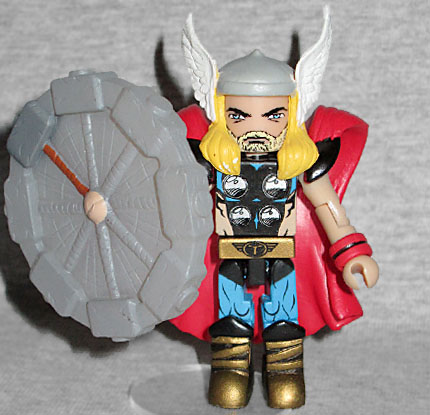 Thor is in actuality a member of the Asgardian race, who live on another plane of existence from Earth. With the help of an enchanted hammer given him by his father, Thor can fly and control the weather, and his love of Midgard has led him to protect it as an Avenger.

You've got a lot of options with this Thor: helmet, no helmet, beard, no beard... the Heroes Return Thor was a vey classic look, so he's got the cape, belt and boots from First Appearance Thor, but painted gold instead of yellow. The hair comes from Armored Thor, and just like that figure, it pushes the head forward. He comes with a plain Mjolnir, but this set is also where the "swirling" hammer accessory originated. 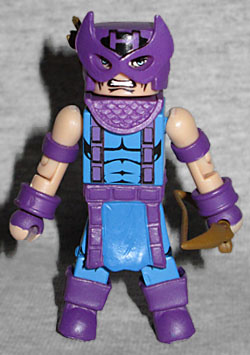 Iron Man, Thor and Hawkeye are just three of the heroes who make up the super-team known as the Avengers. Together, they can neutralize any threat, even the manipulations of the evil Grim Reaper!

This is the first plain Hawkeye since Series 20, and it's only available in an exclusive box set? That doesn't seem fair. He has a new mask, with his H just painted on instead of sculpted, and rather than a huge chest cap, his quiver is attached to the ring of chainmail around his neck. His loincloth is new, and he has the same boots and wrist ring(s) as Dark Avengers Hawkeye. His bow is a new mold, with a clip on the side to hold one of the included arrows: three with pointy tips, two rounded.

comes with a blond hairpiece for when you take his mask off. The mark of a good artist is that they can draw all these guys unmasked, and still have you know who each is meant to be. The same is true for Minimates.

While the first box set only had one exclusive figure, 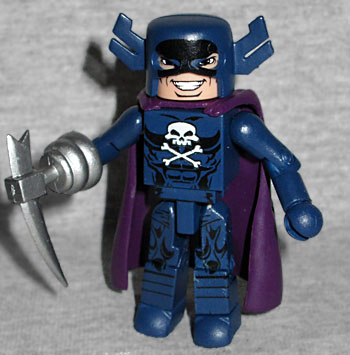 this box features two: Hawkeye, and Grim Reaper. The Grim Reaper is Eric Williams, the brother of Wonder Man, and he's actually died six times while fighting the Avengers. The last time was at the beginning of Uncanny Avengers, when Rogue punched him so hard his neck broke. (He was back to [un]life four months later.)

Reaper's costume is dark blue - so dark that you can't make out the fancy black details painted on him. He's got a wild, psychotic grin on his face, and wears a ridiculous pointy mask. He's like the world's worst Galactus cosplayer. Or a moose. His purple cape is a piece that's been seen a lot before, but his silver scythe-hand is unique.

Getting these box sets was a better buy than getting them in the Series 44 two-packs, especially with the three extra figures. In fact, the only drawback is that you had to get them at the Disney Store, and those things aren't exactly plentiful.