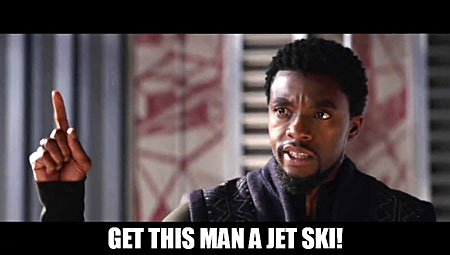 Mobius M. Mobius is an agent for the Time Variance Authority who specializes in the investigations of particularly dangerous time criminals.

Mobius, Loki's work-husband in Disney+'s Loki, is actually a character from the comics. Like on the show, he works for the TVA as a sort of middle-management investigator, known for his fastidious work. He first appeared in Fantastic Four, where he prosecuted the team for illegal time use - so basically, the same thing his live-action counterpart did to Loki.

The comics' TVA was created in the '90s, but the MCU version of the organization had a very late-60s/early-70s aesthetic. So while Mobius is wearing a suit, it's a ghastly, ugly brown with a short, narrow necktie. The shirt underneath appears to be a new mold - other characters have worn ties, but they've had smaller, more modern collars, not giant ones like this. The jacket's new, too, with a single pocket over the heart and no others. Plus, we know the waist is new because he's wearing his TVA belt buckle! Detail!

Comic Mobius was designed to look like Marvel writer/editor Mark Gruenwald, who was dedicated to cleaning up and streamlining continuity, and was the one who codified how time travel works in the Marvel universe. He was played on Loki by Owen Wilson, who was given a mustache to help him look more like Gruenwald. He definitely doesn't have the receding hairline, though. The sculpt of the toy's face is great, complete with a little lopsided smirk.

Mobius comes with two accessories: his Time Stick and his TemPad. The Time Stick is the baton that allows agents to control the flow of a target's time or prune them from the timeline completely;

the TemPad is basically the handheld computer that allows them to do their job, summoning timedoors, looking up info about Variants, and reporting on the status of the sacred timeline. The stick is just a stick, but the pad gets a hinged cover that opens to reveal all the cool little details inside. They could have given him a little Miss Minutes figurine to stand in the display, but what we get is fine.

This figure is a Target exclusive, which means unpredictable availability. Will it hang around for clearance like Katy? Disappear instantly like Gunslinger Spawn and every GI Joe? He sold out online very quickly, but is easy enough to find in stores. Which is good, because how can you have Jean Valjean without his Javert?