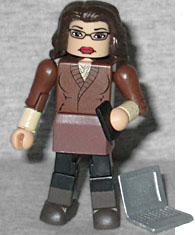 research, but she has never seen anything like the phenomenon that has manifested in East London.

Natalie Portman's great and all, but face it: Darcy was the star of the show. She's seen here wearing a brown sweater that either has a lighter shirt sticking out from under its short sleeves, or there's a really poorly matched "skintone" app on the wrists (judging by her shirt collar, it's the former). She's got a brown skirt over dark leggings, and brown boots. This could easily pass for a Thor 1 figure, despite the surprisingly sad look on her face. She comes with a cellphone and a laptop, but come on: Darcy is played by Kat Dennings, something is missing.

The homeworld of the Dark Elves, Svartalfheim was the source of Dark Energy, a precious commodity in Asgard. Only a handful 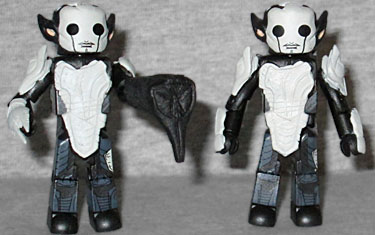 of Dark Elves are left, but their gravity weapons still make them a deadly threat.

Malekith's troops are looking quite spooky here. We had normal figures of them, but the Minimates are nice, too. The upper arms are new pieces with bony armor sticking up off them, and the hands are the same Malekith had, with armor on them. There's a chest cap and a helmet to create all that detail (as well as his hair and ears), and lots of painted details on the body. The elf also comes with two weapons: a sharp and pointy bit mounted on a different hand, and the big forearm gun. 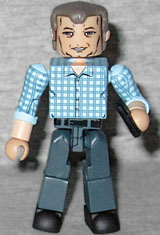 After his involvement in the invasion of Manhattan, Selvig has seen enough action to last a lifetime. But his experience with otherworldly energy sources becomes invaluable when Dark Energy begins to affect Earth.

There was a Selvig Minimate from the first movie, but this one is much easier to get. He's dressed casually, with a plaid shirt that has the sleeves rolled up. The paint continues all the way over the shoulders, but not on the shoulders, which looks a little strange. He's got a bit of a smile this time, and a different hair piece. 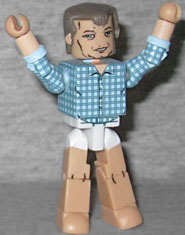 Like Darcy, he also includes a cellphone, but to add a little bit of fun, he also comes with a pair of bare legs. Okay, not entirely bare, he's wearing white undies. Better than running around naked like he did in the film, right? Well, there was a scene where he was wearing a plaid shirt and no pants, but 1) those were jockeys, not boxers, and 2) the shirt was reddish brown, not blue (plus the sleeves were down and he had on a tie). Much like Darcy's clothes look more like what she wore in Thor 1, the blue shirt seems to make this an Avengers Erik Selvig. Variety!