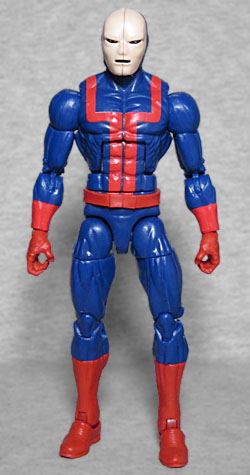 So Hasbro's started this new thing where they offer low(er) priced army-builder figures directly through their website. It's kind of like ToyBiz's old "Bring on the Bad Guys" idea, except it actually happened. It started with re-releases of the Hydra and AIM troopers (the normal little ones, not their fancier buddies), but now they've finally gotten around to something new: the Hellfire Club Guards.

The reason they can do these army-builders is they all use the same plain body with painted costume details. The Hellfire Guards' uniforms are dark blue with red boots and gloves. There's a red pattern on the torso that extends from the belt and up over the top - sometimes it's shown as a square over the shoulders with stripes running down the arms, but that's not as common as this look, possibly meant to resemble a stylized pitchfork? Or devil horns?

The head is new, because there's literally no existing mold that could have accurately represented the Hellfire Club Guard's distinctive mask, which is best described

as "creepy baby skin-graft face, but also an evil chickpea." I truly wish John Byrne had ever explained what he was going for with these. Why are they semi-human? Just to be grosser than a plain, smooth mask? Why the seam? Was he doing that "draw a cross on a circle" layout thing and decided he liked it? Surprisingly, this toy has eyes painted inside its rectangular slits, though you'll almost never see them due to the shadows. Hasbro could have just painted that solid black and no one would have minded. 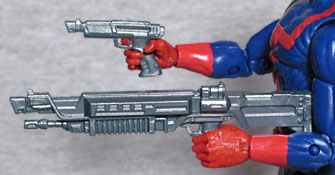 The Guard comes with two accessories: a rifle and pistol in a suitably hi-tech style. Only his right hand has the trigger finger extended, though.

Rather than the normal Marvel Legends packaging, the army-builders are sold in simple boxes - the other reason they only cost ¾ as much as the normal releases. It's like when ToyFare used to have exclusives every month, just a cardboard box with the figure and its accessories bagged inside. It's printed in just two colors - red and black - but does at least feature new art of the character inside: five images of Hellfire Club Guards in different poses. The masks are a little too detailed, lacking the quintessential babyness of the actual design, and looking more like Jabbawockeez than Hellfire Guards.

If you got the Hellfire Club Inner Circle set, the Guard(s) will be a nice addition to the display. And since you'd need, say, a dozen of them to really capture the feel of the comic, having to pay full price would feel like a rip-off. Even creating a two-pack would have been bad, because the point of them is they're identical, even more than Hydra or AIM are; there's no such thing as a Hellfire Club Guard Enforcer or Hellfire Club Guard Brute, you know? They all look alike, so there's no room for Hasbro to get creative. Selling them this way is smart.