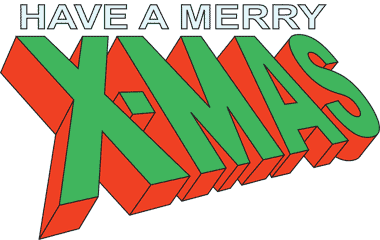 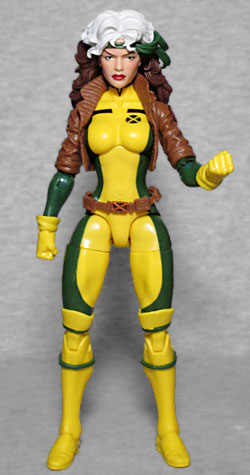 Rogue can absorb superpowers, personality traits, strength, and even memories from others with a single touch, making her capabilities in any matchup nearly limitless. These talents have naturally led her to be a leader among the X-Men.

This Rogue is part of the Retro Collection, meaning she's sold on a giant orange card with lovely David Nakayama art on it. She's mostly the same as the X-Men Legends Series 2 Rogue, but with different colors: lighter browns, a flat green instead of metallic, and a pale lemon-yellow instead of the rich, deep shade of before. That means you won't be able to swap parts with the existing figure, something that leads to some problems we'll be explaining in a bit. 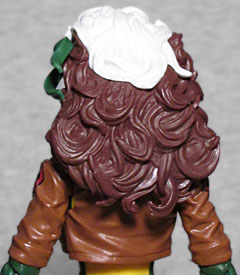 The head is new; or at least, it looks new at first glance. The actual sculpt of the head itself is the same - same nose, same jawline, same ears, etc. - but the paint has been changed just enough to make her look unique. Darker lipstick, narrower eyes, angry brows, all on top of a paler pink plastic for her skin. Even the bandana glued into her temple is the same mold. Ah, but the hair, the hair is different! It's bigger, bushier, and curlier, with a more prominent white stripe (splotch) that makes it all the way to the back of her hair rather than just a few locks over her forehead. In other words, she looks more like X-Men the Animated Series Rogue.

She gets one new accessory that was nominated 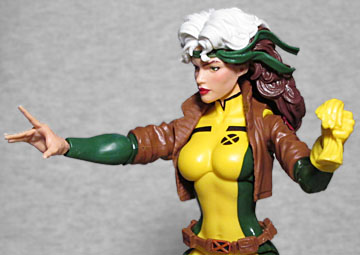 for Toy of the Year because it's doing a lot of the heavy lifting in selling this set, particularly to those of us who already had the last Rogue. Like that figure, she's got an alternate pink hand, to suggest she's using her power; unlike that figure, she's got an alternate left hand that's molded holding the glove she took off! Again, it's a minor thing to include, but the fact that they did is very clever. Only drawback is that you can't switch it over to the other Rogue if you like those colors better (at least not without repainting it first).