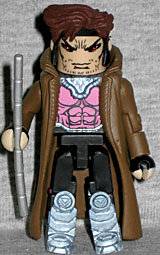 Remy LeBeau was raised as a thief and assassin in New Orleans, taking the name Gambit and often using his mutant ability to charge objects with kinetic energy for highly illegal (and therefore profitable) heists.

Ah, Gambit: the sensational character find of 1990! His costume is presented here in all its '90s terribleness, and that required several new pieces: his brown trenchcoat has his silly blue collar molded as a piece of it, and he gets new feet with sculpted bootfronts to give us his metallic legwarmers. His bright pink shirt and metallic blue belt are just painted on, thankfully, but his head-condom and hair are one shared piece. He's painted with just the right amount of stubble, and his eyes are black and red.

Gambit comes with a silver staff that's reused from Deathstroke, 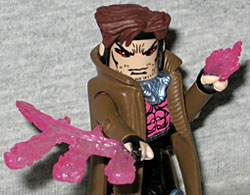 but he also has a few pieces that are new and unique. He has a replacement left hand, molded holding a single playing card that's glowing with pink energy. He also has a replacement right hand, which has a big stream of energy and three cards being thrown. This is exactly the kind of thing we were asking for with Dagger, and it works perfectly! In a masterful attention to detail, the single card in his left hand is the Ace of Hearts, while the three he's throwing are the Spade, Club and Diamond. Too cool! 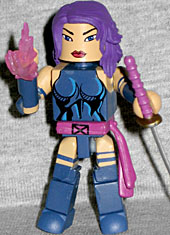 Psylocke after her own telepathic and telekinetic mutant abilities manifested. One body swap and resurrection later she ranks among the most skilled martial artists in the Omniverse.

We've reviewed a Betsy Braddock Minimate before, but that one was back before her race lift. This is her "blue bathing suit" era, though she's been given a lot more anatomical detailing than you might expect, both on her chest and back! Her purple hair is new, and her face definitely looks Asian. She comes with a katana with a purple hilt and a translucent pink psychic knife (the focused totality of her psychic powers, in case you didn't know). Wait, translucent pink? Oh, now I get why she and Gambit were packaged together!

We may make fun of Gambit, but there's no denying he's one of the more popular and well-known mutants, nor that this is his most identifiable costume. And honestly, it turned out better than it had any right to. Psylocke's a great figure as well, making this set a real winner.