So, today we reviewed the new MOTUC Horde Prime, a figure with a secret. A secret face. A face that no one saw until the figure shipped and they opened the blister and took the helmet off for themselves. So far we've preserved the mystery, but you still deserve to see what the face looks like, even if you didn't get to buy the toy. But in the interests of spoilers, the photo is after the cut.

The helmet itself is gigantic and stupid and AWESOME! It looks like someone said "hey Jack Kirby, design an Aztec catfish." Even once you know what the face underneath looks like, you'll want to leave the helmet - not to preserve the illusion, but because he looks supreme with it on! 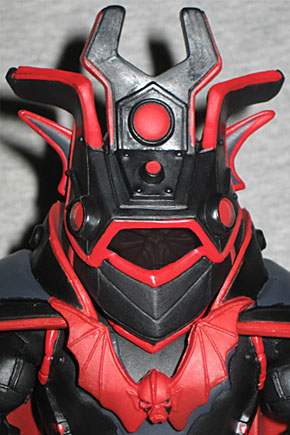 Last chance to not have the surprise ruined for you!

So, if you really insist on finding out what the SECRET MYSTERY HEAD looks like without buying the toy, just click on the image up above. But don't say we didn't warn you!