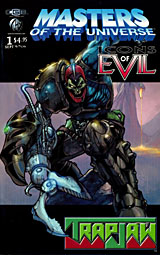 When it comes to the Masters of the Universe, Trapjaw is my favorite villain. He has been since the '80s. Back then, the minicomics showed an origin for him, but it didn't really offer much information: he lived in another universe, and came to Eternia by accident. Like I said, not much info.

The new cartoon suggested something 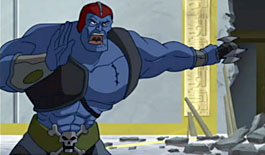 different, by showing a "pre-Trapjaw" Trapjaw in the pilot episode. The website gave us a little more information, but now we have the official story, thanks to CrossGen Entertainment and MVCreations and the third issue of their Icons of Evil miniseries. 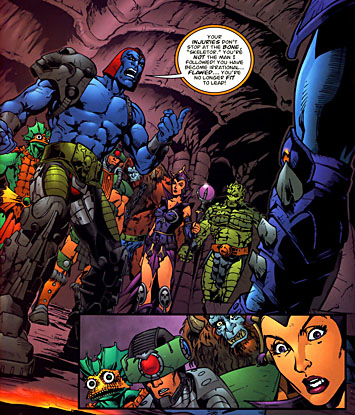 The book is written by Robert Kirkman, and is set soon after Keldor took a face full of acid and needed the help of Evil-Lyn and Hordak to stay alive. It's so soon after, in fact, that the newly christened Skeletor has to remind his underlings that he is still their master - news that a certain blue man by the name of Kronis doesn't take lightly.

Skeletor's not having any of that, of course, and banishes Kronis from Snake Mountain. Why not just kill him? Well, because he's the star of the book, and we know he survives until later. But from a narrative standpoint? Eh, try not to think about it. 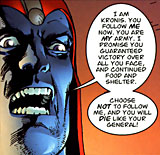 But Kronis is no pushover, and begins raising an army to get some revenge. He's no fool, either, offering the warring tribes that live in the Dark Hemisphere a reason to rally around him: he leads by strength, yes, but not by fear. And when his army is strong enough, he sets off for a final confrontation with Skeletor, looking to take his revenge.

It's not really spoiling anything to tell you that the battle

doesn't exactly go Kronis' way - after all, you know he becomes Trapjaw somehow. What I won't spoil are the specifics of that scene: this is such a BAD ASS moment for the character that you really deserve to read it for yourself. Kirkman really did a great job telling this story, giving both sides of the conflict things to do without making anyone look like a chump. That's not easy to do, but he pulled it off.

The art in the book is by Carlo Pagulayan,

and while it's not as good as Emiliano Santalucia's art for the main book, it's still very nice. There's never any confusion about who anyone is or what they're doing, and the layouts are dynamic. Even as Trapjaw raises his army and we get larger and larger crowd scenes, the details remain at a good level. The fights are brutal, and even the quieter moments are moody and not dull.

Icons of Evil: Trapjaw just came out this past Wednesday, so it should still be available at your local comicshop. You seriously owe it to yourself to read this book...

This entry was posted in blog exclusive review, comics and tagged MotU. Bookmark the permalink.