Well this is an unexpected find! Target had a single new Eternia Mini hanging by itself on a peg near the unsold MotU Origins He-Men and Skeletors, and it was someone new:

Orko has never had the same kind of proportions as the other MotU characters (though that would be hilarious - get on it, customizers!), so it makes sense that his Mini is different from the rest. Can't have huge arms and little legs when you have no legs to begin with, right? Really, his proportions hardly seem exaggerated at all; this is just a normal Orko, with his orange hat, pink scarf, red robe, and blue skin. His face is concealed in shadow, and the O on his chest is sculpted in place. And considering the size he was on the cartoon, this might actually be in scale with vintage MotU toys.

Since he floated everywhere, Orko is mounted on a clear plastic stand. 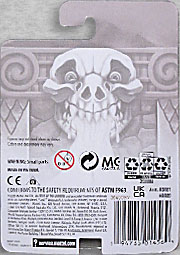 It's a balljoint, so he can be removed if you want. His shoulders swivel, and his head is balljointed as well. Since his molds don't have as much re-use potential as all the other figures, no portion of his budget went to any accessories. He never used much, but they could have given him his "Mo2K" scepter/wand thing. He wasn't pictured with the other cancelled MotU Minis, so we don't know if anything was planned back then.

Mattel seems to have given up on the molded plastic shells used for the first two series, but if the back of Orko's little card is any indication, Series 4 would have repped the Slime Pit. And yet they already did Slime Pit He-Man in Series 3! Missed opportunity.