Since Eternia Minis are based on the '80s toys, Jitsu does not have all the cool details the Four Horsemen designed for him in the '00s. That also means he slips 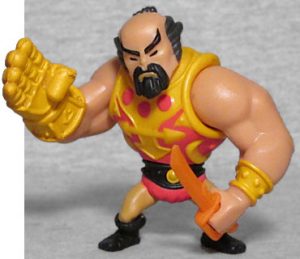 back into "uncomfortable racial caricature" territory, especially since the eyes on the humans in this line are just squinty black lines. Whoops! [Whoopsie! --ed.] if they ever get around to making a King Randor, though, they'll have the breastplate ready to go. When this figure was originally solicited, the armor and giant Infinity Gauntlet hand would have been gold, but they're just yellow here. And his back is fully unpainted. He gets accessorized with an orange sword; unlike the vintage figure's, it curves the proper direction. The heavy hand makes the toy want to fall over, so you'll have to pose him carefully. Or use one of the footpegs on top of the packaging. 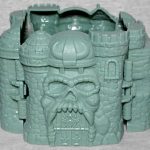 The neat thing about the plastic shells these figures come in is the way they snap together at the sides to form hinges - if you want to open it on either side, you can, and thus any of the pieces can fit together with any of the other pieces. While that does mean you could create a half-Grayskull, half-Snake-Mountain abomination, there's a better option available: put two Series 1 packs together, and you've got a four-sided castle the figures can fight over!