In today's review of Retaliation's version of the classic Cobra Water Moccasin, we mentioned that the sculpt may not be new, but that it definitely wasn't designed with the Swamp-Viper in mind. How can we be sure? Because of this: 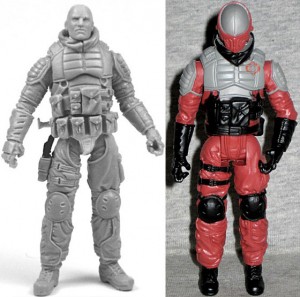 As first found by Generals Joes, the sculpt on the left is by freelance sculptor Mat Brouillard, who shared the image on his Facebook page. Apparently it was an in-progress sculpt (with a placeholder head that would have been swapped out later) for a 4x4 Driver - probably Clutch - but the release got cancelled.

If you look at the large image, it's clear that the Swamp-Viper is just a reworked version of that sculpt, with less articulation and fewer separate pieces. So it's a shame that the figure got toned down, but it's nice that we got it in some form, at least...