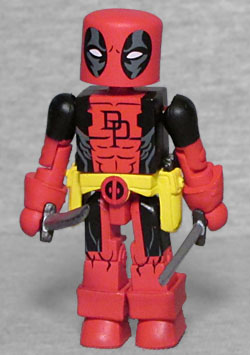 Back in 1984, Deadpool and other great heroes were transported to a distant Battleworld, where they had to fight the world's worst villains. Also he had a mustache.

Yes, Deadpool took part in the original Secret Wars. Yes, even though it was published seven years before he was created. Comics are allowed to be fun! Anyway, since the story took place in the '80s, Deadpool is wearing his '80s costume: it's a lot like his usual costume, except it has a bright yellow gunbelt and a "DP" logo on the chest (inspired by Daredevil's double-D's). The highlights on the black sections of his costume - the ribs, the eyes - are done in grey, but if this was really supposed to be an '80s design, they should have been blue, because that's how coloring worked back then.

If you've read Secret Wars, you may remember Zsaji, the 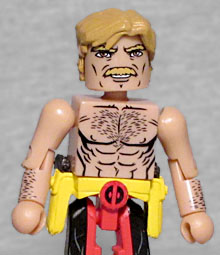 alien plot device woman with the healing powers. Colossus and the Human Torch were both in love with her after she healed them, and we literally never get any indication of her thoughts or feelings? Well, not knowing about Wade's healing factor, she attempted to tend his wounds, too, and ended up accidentally curing his cancer... and by extension, his ugliness. Apparently fully healthy Wade Wilson looks like a blonde Tom Selleck, complete with mustache; no wonder he was able to hook up with Wasp! So in addition to the two handguns (which he uses to shoot at the walls of heartache, bang-bang) and his katana, the set includes a bare torso and hair for his unmasked head. He's bringing smexy back! 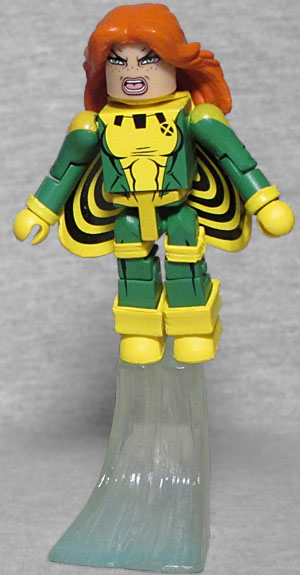 The daughter of Banshee, Theresa Cassidy inherited her father's sonic scream, and used it as a member of X-Force. She once had feelings for Deadpool, but she got better.

Originally Siryn just wore the same costume as her dad, though it obviously looked a lot better on her than it did on him. She's stuck with that green-and-yellow colorscheme for most of her career, so that's what she wore at this time with her second X-Force uniform: a green suit with a yellow stripe down the center, and dark bars up by the collar. Sometimes she wore a green headband with it, but this Minimate doesn't. Her face is painted to look like she's shouting - you know, using her powers. Cute freckles, too! Like the Banshee Minimate, she has the stripey cape, the two-footed flight stand (though her foot is too loose on the peg) and the cool "scream" effect that can slip around her neck and line up with her mouth. Such a clever accessory!