With his worthiness called into question, Thor must fight to preserve the legacy of Asgaard and the godliness that he once claimed.

This is the "vanilla" Thor for Ragnarok, despite looking not much at all like movie Thor has traditionally looked - that is, no attempt has been made to make this movie's costume look at all like the comicbook costume - no bright colors, no discs on the chest, none of that. The shirt has the same kind of angular designs we've seen before, but it's a dark grey with a minor bit of gold trim, ratherthan being blue and silver. He has a short loincloth hanging below his belt, and a large leather strap across his chest. His cape plugs into the front of the left shoulder, first going through the strap, then draping across his back and plugging in again on the right hip. How very odd! He has red writing down his left side, and two pieces of armor: a pad on his left shoulder, and a plate on his right shin. 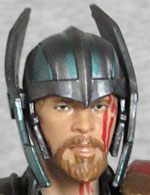 He's also wearing a protective helmet with stylized angular "wings" on the sides, which is at least a nod to his traditional look. They seem like they should pivot (as they clearly do in the movie), but no, they're just glued in place. A missed opportunity! This Thor has red war paint on his face and neck that the Minorly Different Thor covered in the main review did not.

while this toy doesn't - he just gets the gripping hands that allow him to hold his two swords. Since they're the same metallic blue as his armor, we can easily guess they were given to him by the Sakarans. Beyond those, he comes with a piece of the Gladiator Hulk Build-A-Figure. Well, two pieces. The head and the helmet. And kudos to Hasbro for going so far as to even detail the interior of the helmet! Who would have even noticed if they'd skipped that?

Unfortunately (for everyone's wallets), both versions of Thor are different enough from one another that we can't really tell you to just get one or the other. 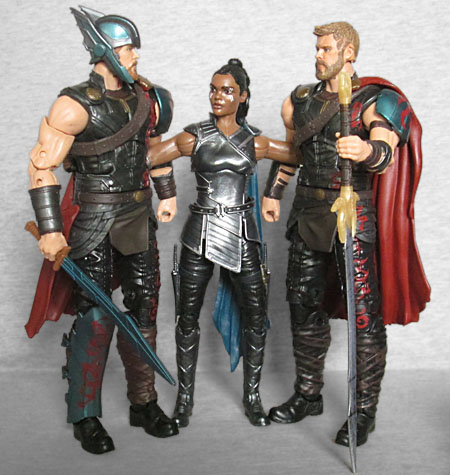