If you compare the promotional images of Art Asylum's Marvel Zombies Minimates box set to the final product, you'll notice some changes. Let's take a look: 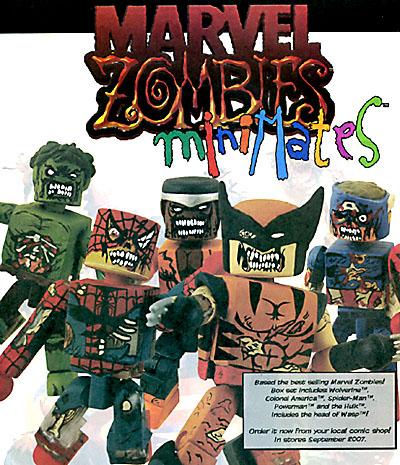 Hulk's stomach wound is much more graphic in the original. They went from a an abdomen full of vibrant tissues and organs to some weird generic green thing. And what's with the ribs? They seem to be floating outside his body.

Spider-Man lost some clear pieces. Looks like his right arm and left thigh wee both supposed to be translucent, for more extensive zombification. We went from seeing his right elbow bones to having a pink streak on his costume, and the hip which was meant to be exposed is painted entirely blue. There's also less "meat" around the wounds we did get.

Wolverine's right arm was supposed to be clear, representing the... problems he had when he ran into the Silver Surfer. We still get the exposed adamantium bones, but the skintone isn't supposed to be there.

Captain Colonel America and Luke Cage seem to have made it from prototype to production without any noteworthy changes. And honestly, while there have been changes to the other figures, they're not enough to keep you from enjoying this set. Go get it!