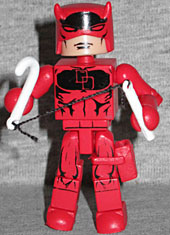 Young Matt Murdock was blinded as a child, but the substance that did it also enhanced his remaining senses. Now he practices law by day and fights crime by night.

This figure is identical to the Series 43 Daredevil. Not "functionally identical," not "mostly identical," really truly 100% identical. It's not often that Art Asylum does straight re-releases like this, but when they do, it's annoying. I mean, this is a very nice Daredevil, with complex apps on the chest and legs, a nice unmasked Matt Murdock head, and both his batons and his cane grappling hook as acccessories, but I love Daredevil, and even I don't need two identical ones.

At the height of his power, Wilson Fisk ran all the organized 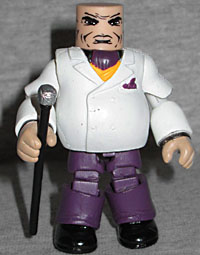 crime in New York City, a fact that often put him in the sights of several of the city's superheroes, including Daredevil.

This is the first Kingpin Minimate we've had since Series 1, making him a much-needed update. This one adequately shows us his size, too, using not just a large chest cap, but also coverings on his upper arms and legs, "boot" pieces that extend his legs and put pantlegs wrinkling against his dress shoes, and "gloves" that give him bare hands and the sleeves of his jacket. He's bald, so his head doesn't have a hole in the top, and his face is painted to look fat. The tampo varies quite a bit in its up-down placement on the head, so you'll want to look before you buy to make sure you like the way it looks. He's armed with his diamond-headed cane, because that's all he needs.
Previous