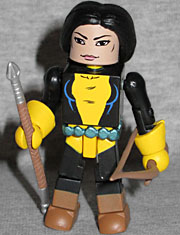 her psychic powers to create illusions from people's memories, and later focusted them into energy arrows.

We may still be waiting for Hasbro to get their Mirage figure out, but Art Asylum got this one into TRU two years ago. She's wearing the standard New Mutants uniform, but has personalized it with buckskin boots and a shiny blue belt (though she does also include a plain red belt, if you want her to look more like a member of the team. She gets a new hair piece, with two long braids, and is armed with a bow and arrow and, cleverly, an Asgardian spear (since, in the comics, she eventually became a full-fledged valkyrie, with the winged horse and everything). 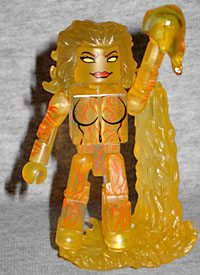 New Mutant Amara Aquilla grew up in Nova Roma, a lost Roman city, and she discovered her ability to control molten rock and generate intense heat when she was thrown into a pit of lava.

It's honestly a bit daft that this is the only action figure Magma has ever had. She's a nude girl made of fire - how is that not in every X-Men toyline ever made? The Minimate is cast from translucent yellow, and has thin orange lines painted all over her torso and limbs (which matches the way her powers were shown in the comics). She also comes with the "flight hair" originally seen with Nova, but it doesn't plug into her anywhere; presumably, it's meant to represent an eruption she's caused. She also gets two "energy fist" pieces, to really flame her on.

Between this set, the previous TRU exclusive, and the box set, Art Asylum has managed to give us the entire classic lineup of the New Mutants, and that's pretty impressive - especially since they're all designed so well! 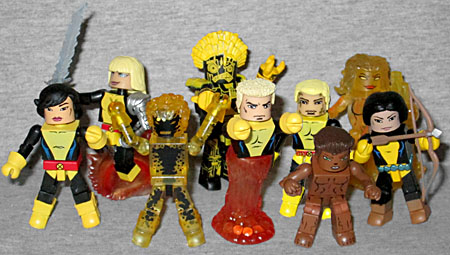