In today's review of the new X-Men movie Wolverine action figure, yo briefly mentioned the packaging. Let's take a look: 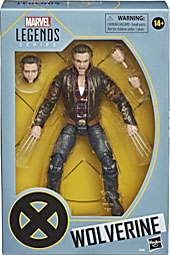 The comparison in the review to Marvel Studios and Marvel 80th Anniversary was apt, because this line is also sold in rectangular boxes, rather than the oddly shaped boxes Marvel Legends come in. It's simple design, with the X-Men's "circular X" logo represented in several places (behind the figure on the tray, outlined on the top and side, etc.) and even referenced to a degree in the shape of the clear window. So far, it comes in two colors: metallic blue for the X-Men themselves, matching the kind of cool colors seen in the depths of the X-Mansion; and red for Deadpool, with additional fake "stickers" covering the X's with his own mask logo.

The sides and back of the packaging feature artistic silhouettes of the character within, with some small element picked out in pure white to make the design "pop": 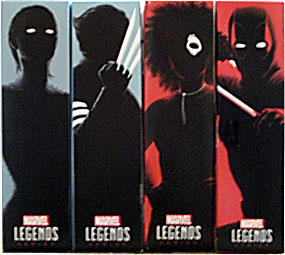 Frankly, it looks stunning. Though it still does nothing to help defray the additional 25% cost of the toys.