Amidst all of my traveling and seemingly endless Toys Я Us Clearance hunting I managed to round up a small but effective haul from my brief time at homebase. What's that you say? "Tell us more, please!" Well, boys and girls, who am I to deny you my unqualified opinions regarding such nonessential items!? 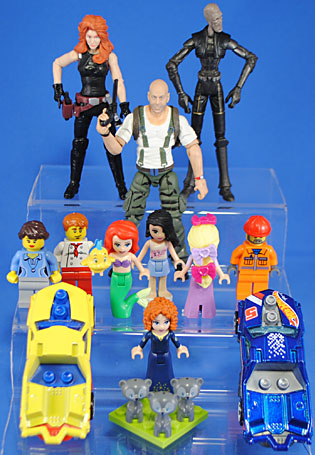 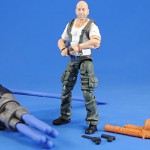 I had actually snagged a Colton really early on, but his stubble paint was wonky as heck so I sat on him in hopes I'd find a better paint job - I just had no idea it'd take over six months! As a figure, he's okay - nothing special. I like getting an "undershirt" figure for the collection but his sculpted on suspenders are pretty terrible since they look pretty bad when not perfectly lined up. He comes with a useless quad-missile launcher which fires all four missiles rapidly (admittedly it is kinda fun, though a very short-lived fun). Equally odd is a big, sand-brown gun with a hollow cutout on one side. He also gets a handgun, revolver and a shotgun. But that's all filler - we only give a damn about this figure because of its head. Bruce Willis!!! This is quite possibly the best 4" scale likeness I've ever seen and certainly one of the better in any scale (excepting Hot Toys). I just wish there some other figures I could pop his head on to, because from the neck down this guy really does nothing for me. 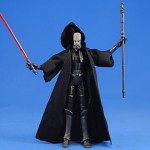 I was surprised and titillated when I stumbled upon an unopened case of Star Wars 4" figures at a Target. A couple over-the-shoulder glances and a flash of the car keys got it open and what did I find but a box of 12 figures, all at one per case. Ah, Hasbro. Plagueis is kind of exactly why I hate Expanded Universe. Well... not "hate" but certainly "have no love for" because it tends to just dilute the source material. Palpatine's speech about this guy was pretty much the only watchable part of Episode III and one of the reasons of that is "open door" of vaguery - was Palpatine telling a legend, or a true story? His own past or just making junk up to manipulate Anakin? Well - (until recently) it was a cardinal sin to leave any question unanswered in Star Wars so we got this goofy nonsense. The design is easily the least threatening appearance a Sith has ever suffered and really I just got him for the rarity and the novelty, I think. He gets a lightsaber, a staff, a lamentable softgoods robe and a removable respirator as a token Vader reference. 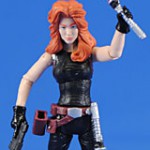 Woof - that hair! This is a pretty darn good figure of the would-be Lady Skywalker. She comes with her lightsaber in both ignited and hilt modes, plus a cool boxy blaster. The blaster fits in holster on her belt which can be plugged in on the side and also on the back, pretty nice. For reasons wholly unclear to this figure wound up with an awful hair sculpt that is both highly restricting of motion and totally unnatural looking - like she's wearing a wig over a wig. From the neck down this is the definitive Mara Jade and Hasbro could have walked away proud, but that's not the way things work these days. 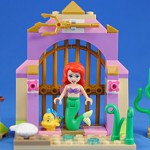 I'm bummed (though unsurprised) this line rolled out to tie-in with Friends as I will always prefer mini-figures to mini-dolls, but Ariel turned fantastic. Still though, despite how great Ariel and Flounder turned out this is a bad set. It's condescending. Other than the figures there is nothing related to the movie here, and instead of creating something like her "treasure cave" we get this "girls will only buy pink things" B.S. I'm all for the more pastel colors of the Friends line and understand their use, but this set has reference material and any age-appropriate child will realize this isn't what's in the movie. Rather than providing the proper Disney sets we wanted, and creating more film-accurate sets that could reach out bring boys into the Friends theme, they just went hard right and made sets that are exactly what people attacked Friends over in the first place. 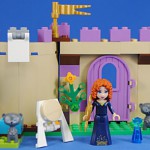 Fortunately this set isn't quite as offensive as the Little Mermaid but still leans heavily on old gender stereotypes at the cost of creating a good set, a film accurate build and a set that had cross-promotional potential with the Castle line! Again, the only reasons to get this are the Mini-Doll and the animal buddies, in this case a great Merida doll and her three little bears. While the bears are adorable and pretty accurate to the film they are fairly annoying since they have a tenuous single-stud grip and pop off easily. On the plus side are some great accessories like four cookies and a fish plus a nice little tree build. This was actually a decent build and had more than I expected, but I'm so incredibly disappointed in both Disney and Lego in the color choices here. Sand colored walls with lavender accents and door!?!? I just can not conceive of why they wouldn't do sets from the films and why they had to go off the deep end of gender biasing. 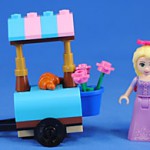 This is a fun little Walmart exclusive polybag my friend found for me. While it does feature the bold colors familiar to us from Friends it looks good and makes sense for a small little cart. I quite appreciate the inclusion of the rare-ish balljoint triangle piece though it does feel a bit weird not having anything it can connect to and be pulled. Rapunzel is a cute little thing with a new hairpiece, though the long braid only reaches down to her waist. It also has two pegholes for bows allowing for ultimate beautification. 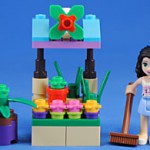 This is another cute Walmart exclusive polybag. The Mini-Doll isn't anything special beyond your average "friend." The stand is pretty nice with some good pieces (like brown telescopes) and because Lego tends to throw in extra duplicates of small bricks you can actually make about twice as many flowers as intended - nice! I'm sucker for polybags and bright colors so I'm pleased to have this, but like most Friends polybags, it is fairly forgettable. 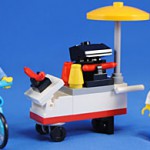 This was a "free with purchase" set back during last summer (or was it fall?) but for whatever reason the "local" Lego Store had a bunch out for sale and thus I got one! You get two Mini-Figures, both built out of familiar parts - a woman and a hipster chef. The woman comes with a light blue bicycle which looks great. This might be my first Lego bike and I'm really surprised by how much I like it. The build itself is a cute little Hot Dog cart. It's fun enough for what it is and includes a surprising number of hinged bricks. As a polybag this is is a fun little set, but I'm not at all surprised that they had plenty of left overs since it would hardly inspire me to spend $50-$100 in order to get one "for free." 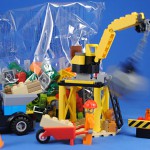 It's a pretty fun build with what's shown coming from the first two different instruction manuals. I really dig that they're doing that, including alternate instructions, because it seems like a fantastic way to encourage "thinking outside the box" by showing different options. Likewise I was equally impressed that the set came with a third bag of purely excess bricks! Sure they're all fairly standard bricks, though in fun colors, but again this is stellar. For me, though, it's all about the bricks so the yellow "X" supports were the main draws, and one simply can never have too many of the sculpted brick bricks, especially since they come in both tan and light brown here! This set is a great way to stock up on uncommon bricks and it is likely I'll be getting at least one more of this. 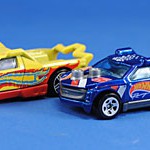 Aaaaaw, Fig Rig... the car that broke me and dragged me into the world of Hot Wheels (semi)collecting. As you may recall, this car is designed to be compatible with Legos, and indeed all other construction toys, making it a very fun toy. I also have a somewhat compulsive "rule of three" so with the latest release, in blue, it was time to build the set! The yellow car has been out for a while and very annoyingly has blue plastic for the "engine" while the original red and new blue have silver, this it doesn't quite fit in. There is also something about the yellow that just isn't very appealing, I must confess. However, the blue is awesome. You know I'm a sucker for metallic blue and this one comes with a gorgeous finish that virtually demands I get one or two more. Unfortunately it comes with a standard "Hot Wheels" logo on the side rather than the pixelated, brick-like version on the red and yellow cars, but the metallic blue color more than makes up for that (at least for me). If you passed on either version of Fig Rig before you simply must pick up the blue one - I mean, come one, it's only one dollar!

This entry was posted in Disney, Rustin's Spoils of the Week and tagged GI Joe, Hot Wheels, Star Wars. Bookmark the permalink.