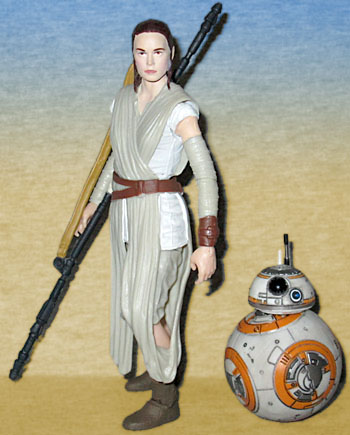 You may recall that our review of Black Series Rey was less than enthusiastic - so much so, in fact, that BB-8 won "Best Accessory" in the ToY Awards because he was doing the heavy lifting when it came to selling that pack.

Now, however, a new wave of Series 1 is shipping, and the figures have some minor changes. For instance, BB-8 now has a paint wash on his body, not just on his head, making for a better cohesion between the two. Both halves look like they belong together, making a great accessory even greater.

But what's really impressive is the redone paint on Rey. The body is mostly the same (the paint on her belt seems a little tighter, but still within normal variances for a mass market action figure), but her head has been completely redone. The skintone is the same, but the paint is no longer as thick and gloppy, and her lips are lip-colored, rather than kabuki-makeup red.

This toy now actually looks like Daisy Ridley, and all because of a better paint job.