"Halloween ComicFest" is the Sweetest Day to "Free Comicbook Day's" Valentine's: it takes place in the fall instead of the spring, and nobody really pays any attention to it. But for the first year at least, there was an exclusive set of Walking Dead Minimates to drum up attention.

As the owner of a large camping vehicle, Dale is an invaluable member of the small band of survivors, and has made the group feel welcome in his 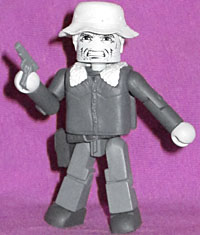 mobile home. His outlook may be pessimistic, but that doesn't mean he's wrong.

This set is a grayscale repaint of the variant pack from Series 1 (which I would have reviewed already, but it turns out I don't own Series 1 yet - for now it lives only on my Amazon wishlist). Dale is known mainly for his hat, a feature that this Minimate keeps intact. Beneath its floppy brim, he's got a very angry look on his face. He's also got painted stubble, though it doesn't show up very well against gray skin. He's wearing a thick coat with fleece around the collar, and though there's a shirt painted beneath it, all this grayscale means it's basically the same color as his jacket. He has a belt with a working holster, and a pistol to fit inside it.

Survival tip: due to their decreased blood supply and lack of circulation, zombies freeze much faster than the living, which makes cold weather a blessing for 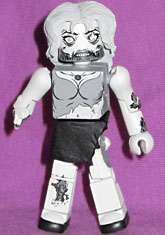 those looking to outrun the undead.

All the Walking Dead Minimates are meant to represent specific zombies from the comics, but the Female Zombie is an odd case. She seems to be an amalgamation of two different sources: officially, she's based on the cover of Hardcover Book 5, but that one's only seen from the nose up; meanwhile, in issue #20, there's a zombie that dresses like this, but is nearly bald. Eh, go figure. The figure gets a bunch of new pieces that were later doled out to various Marvel Zombies: a torn hip, an arm stump, and a torso block with molded wounds on the rear right shoulder and around the left ribs. The wounds on her left leg and right knee are just painted, and her face is done with a ragged jaw (which, in black and white, ends up looking like a full beard). The figure also includes a replacement right arm, one that's undamaged.

I'm honestly surprised that there aren't more black & white Walking Dead Minimates (but then, I also think the TV show should have been that way, too). Like, I can understand why they might think B/W Minimates would be too boring/repetitive for the shelves at Toys Я Us, but imagine if you could get black and white series at the comicshop, and then the same ones in color at TRU a few months later. It'd be neat!

This entry was posted in MMMR and tagged Minimates, zombies. Bookmark the permalink.