Playmobil's blind bag series keeps on barreling forward, which is great since they seem to really hit a solid stride on character designs. This fifth series of male figures offers some really great additions to the collection and is a nice sampler for many of the different Playmobil themes. 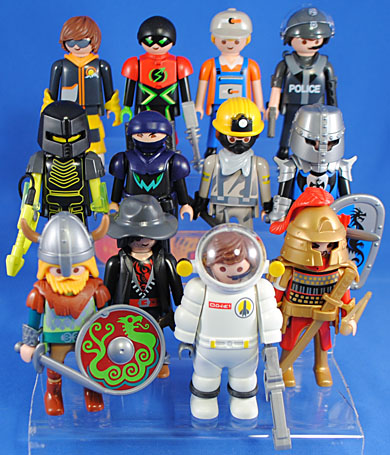 Boys Series 5 comes in the standard foil bag with a big group shot on front and the familiar color streaks behind it. Once again we get blue as the dominant color (for the third time), however for this series the streaks alternate between blue and silver so the bag not only stands out a bit more it's also easily distinguishable from the previous series'. As with each series before there is a white box on the back labeling this as assortment 5460 01 with a bunch of other numbers, though yet again the rest of the numbers don't seem to hold much or any consistency in terms of discerning which figure is inside the bag. 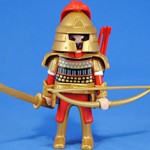 Clearly a tie-in to the latest ill-fated iteration of the Dragons theme comes this guy, who reads as a Chinese or Mongolian warrior to me. I was expecting to find him as silly as the rest of the Dragons theme but honestly, in hand I think he's rad enough that I'm thinking of getting more. The armor is fanciful but feels historically accurate or plausible, at least, with no small thanks to the elaborate print on his chest. He comes with a golden katana and a long bow for maximum slaughter. He's a really fun character and just a reminder how much better a proper historical Asian theme would be to the silliness what it is the rainbow dragons they're pushing out now. 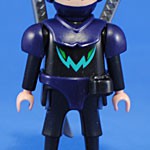 This was another guy I had planned to write off but in hand I find I quite like. The black body with the dark blue highlights turned out, though a bit fanciful, properly stealthy. I'm not crazy about the light blue "M" on his torso. It ruins the plausibility of the figure but does add a nice bit of "flourish" to him the same time (i think a gray "robe" print or something would have been better. His head is faceless and cast in dark blue with the exposed skin and eyes being painted on. His "hair" piece is a remarkably clever and effective reuse of of the bald-head-with-bandana piece (like the Shaolin Monk and Pirate had in Series 3). His belt has a clip on sword loop which is totally unnecessary since his shoulder armor has TWO on his back for awesome double-katana storage. I really dig that a whole a lot! It's another clever reuse of the Dragon Knight Armor. I would have preferred him to have black or dark blue hands, and some kind of more subtle torso paint but overall this guy is pretty cool I must say. 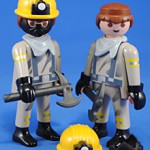 Firefighter? Coal Miner? Crazed Maniac? I honestly can't really figure out who this guy is but I do know he is super awesome! I love the look of him so much I got two and I'm definitely going to have to pick up a couple more. Most of his look comes from simple but very effective paint. He also gets clip on gloves, an axe (which makes me think Firefighter though he looks more like a miner to me), an incredibly great hard hard and a very cool gasmask. The gasmask I though was a clip-on but its actually a piece that hooks in to the beard sockets under the hair. Then a simple neckerchief completes the look and simply makes for a fantastic figure! 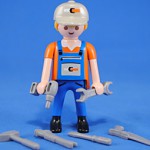 Yet again, a figure I was lamenting having to purchase but in hand I really quite like! This may well be the first Construction theme piece I've ever gotten and he's a good one! Other than his hat his outfit is entirely created through paint, and it's both an excellent design and execution. In the photos he's shown with a two wrenches but in reality he comes with a whole bunch of tools: both wrenches, a mallet, a power drill, a screwdriver and a handsaw. Now that is impressive. While he's not necessarily my cup of tea, this is a fantastic "battle builder" for a very popular theme so between his swell execution and bevy of accessories I can see the Construction collectors buying up tons of this guy. 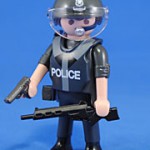 One thing I always liked about Playmobil was that it never did modern military stuff, despite there certainly being a market for it, so I was a little tickled and little disappointed to see them do a sizable SWAT team push recently. While this guy fits into that stuff he's fairly neat in his own right too. He's wearing a separate bullet-proof vest and actually has a peg on his torso to which a gun holster attaches. He comes with a helmet, a handgun, a hands-free mic that connects under his hair to a heard-slot and the same rifle that came with the Sharp-Shooter from the Olympics theme in 2012. The rifle is annoying because he can't really hold it properly, either just by the butt or by a peg, meaning it's "hovering" to the side of his arm. Visually it's a pretty compelling and neat figure, though of course it is tonally a bit odd for the line, I suppose. 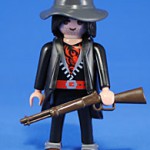 I'm pretty bummed that the only misfire (slight pun intended) from this series is from the Western theme. Rather than a cool Outlaw or Bounty Hunter they did this guy... the heavy use of black is too bland and cliche to be that appealing, especially with red as the only color he gets, but it's the ludicrous scorpion shirt that makes him impossible to take seriously. He... It... Just... Silly. A complete about-face from how realistic and great everything from the theme has been since it was relaunched and a disappointing figure plus waist of release. The only positive things I could say for him are that at least he comes with a Winchester rifle and clip-on spurs. 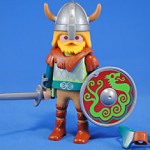 I thought I was all Viking-ed out until this guy walked into my life. He takes the fur collar and boots from the awesome Stone Age line and by bringing back the Viking helmet and shield then doing some great and design and color work this guy becomes essentially flawless - the quintessential Viking! I especially LOVE the shield design. A lot! Included with him is a green belt to which a brown sword loop attaches but I don't know why - putting it on covers up the excellent belt buckle paint app he has. This guy was nearly impossible for me to find and it is no wonder, he's great! 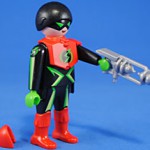 So... another Space/Super Hero figure... I guess "if at first you don't succeed, try and try again." Honestly though, I fairly dig this guy, at least from the neck down. The red and two shades of green compliment each other nicely and the jagged design looks pretty good too. A nice touch is that he has a similar pattern running up his arm, though the cool bit at the shoulder is sadly covered with by the clip-on shoulder pad (and the chest armor looks goofy without the shoulder pieces, and there is nothing on the torso under the chest armor, so... ). He also gets a neat space gun that has a cool '50s flavor to it. From the neck up, though, this guy just falls apart for me. The angular mask is cheesy and the swim cap (complete with not-Speedo logo on the right side [since this is taken from the Olympics theme]) just doesn't help. The head makes him look like a villain or space burglar, which just confuses the entire message about who and what this guy is. I appreciate that they're very invested in creating a hero but they need to accept it's darn near impossible and just stick to things more in their comfort zone. 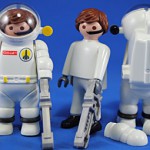 Awesome, awesome, awesome. I love clever re-use and this is the definition of it! Originally a bright yellow deep sea diving suit you'd never know it looking at this guy! The suit looks great in white I dig the alien text jumble and spaceship logo on his chest, and of course the clear half dome is just plain cool! The suit is two pieces with are held together by the clear dome and by thick rubber loops around the legs. He also gets a nice pincer accessory and the same cool communications headset as the Sharpshooter. I'm a little bummed there's no paint on his torso under the suit but there's no doubt plenty of cost already in play on this figure. Obviously I got two of him right of the bat 'cause he's the best! If get just one Klickie from Series 5 - make it this one! 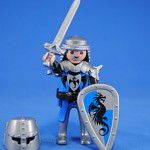 Here we get yet another token Knight for the series. I like him enough though he's not terribly impressive. The blue looks good on him and I like the helmet, which is new at least to me. I'm of a mixed mind when comes to the uniquely armored limbs, but I think this guy pulls it off well enough. All in all this is probably my favorite of the Fi?ures Knights, but I do miss the days when there common forces whose insignias appeared on multiple Klickies in multiple sets. 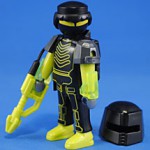 Okay, so... I have no I idea what I'm looking at here. I guess maybe he's some sort of villain to the Tron guy in Series 3? Maybe? I mean, is he human, alien, robot...? What really confuses the whole issue is that he has a regular Klicky head, but cast in black with two big yellow eyes painted on it, then he has a black hair piece, but the kind with curved edges... I just don't get it. The Tron-ish pattern on his chest and legs is pretty cool though. 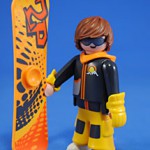 This guy was also poised to be disliked by me but I gotta admit he turned out alright. I'll never like the Bieber/hipster hair style but I understand that you've to be be X-Treme to snowboard. The outfit is surprisingly good (meaning realistic) and feels very natural to this sport. His board is nice too. My biggest issue is the permanent/painted on sunglasses (I wonder why they stopped doing the head with alternate faces like in Series 1) but ultimately it's kind of a non-issue for me since this isn't really a theme that is near or dear to my heart.