We've discussed before how my day job requires a hearty amount of travel and thus it was in April whence I found myself in three different states over as many weeks. More importantly, though, this afforded me ample opportunity to visit some TEN new and different (to me) Toys R Us'! Since stumbling upon their sweet, sweet, massive clearance sale I've been semi-obsessed with going to as many as possible since there is no telling what may or may not be pegwarmers in different areas! Case in point... the epic-ness you will find below! 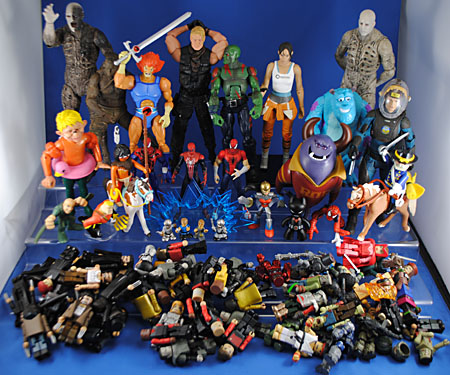 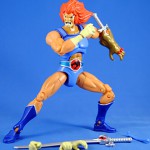 Since I already had the 8" Lion-O I wanted to wait for a sale on this one, but then he ended up selling out fairly well. Fortunately one Toys Я Us yet had him for to make me a cheery boy! Bandai, oh Bandai... the poseability and playability of these figures is second to none! This guy is so, so, so much fun to pose, and indeed I wish I had a second to have multiple poses on shelf. He is ostensibly identical to the 8" version, just a more rational 6" scale and with a new/different facial expression - ROWR! The only real issue with the figure is that Bandai not only used screws to assemble him but that they didn't even attempt to hide them (though fortunately all the screw-heads are backwards facing). Had only they launched the line in this scale it would have been quite successful. Such fun, fun, FUN toys! 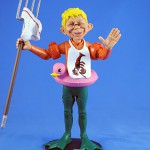 Like most DCD stuff the price was easily $5 above a reasonable pricepoint which held me off, and many others it would seem. Plus, the final product is nothing all that exciting, alas. He has decent articulation and while the paint it clean it feels lacking. The sculpting is equally good though simple, and (probably a molding issue) the incredibly uneven eyes are very distracting. Plus they have a bit of a "pink eye" look, which may have been a very clever idea but comes across as poor paint on the final product. I appreciate that the floaties are a different shade/finish than the shirt but the flippers should have been treated the same, especially since there are sculpted details denoting them as separate-from-the-pants. He's got a starfish sculpted/painted on his thigh, but since it's backward facing there's no point to it. The bib, floaties and duck float are all non-removable. This a fun idea of a toy but a lackluster final product. 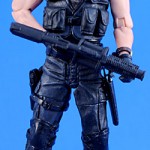 I really love it when folks try something new and flex outside of their comfort zone but this figure/line was just a misfire on almost every front, sadly. Dolph is easily the best thing about the two movies so I was fairly pleased that he came out the best of the three figures. The Stallone and Terry Crews likenesses are pretty rough but this is identifiably Lundgren. Sculpting is pretty soft across the board on this figure unfortunately and paint is pretty minimal. He gets a balljointed head, balljointed shoulders, swivel biceps, wrists & thighs with hinged elbows and knees and a basic T-Crotch. In a lot of ways this reminds me of the old Stargate SG-1 figures but with weaker sculpting. He also comes with a handgun, a knife and a grenade launcher; none of which he can hold exceedingly well. As a figure no one really asked for he turned okay but put him next to any comparable character from NECA and this guy falls apart. But... at least DST tried something new, I guess. 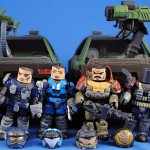 These may well be little more than straight repacks of previously released toys but I have enough Halo Minimates I figured it'd be fun to get these Warthogs with more recognizable weapons than the rocket-launcher one I already had. The "M12 FAV Warthog" features the iconic Gatling gun and comes with straight re-releases of Jun, Carter and Kat (could that be a pun-ish reference to June Carter Cash?). While those characters aren't the most visually exciting they do all have fully painted heads under the helmets so I don't mind doubling up on them too much. The "M12 LAAV Warthog" has the cannon-y looking gun and comes with reissues of the cooler looking Jorge, Emile and Noble 6 (though only Jorge has a painted head under the helmet). These aren't the most exciting releases, particularly if you'd been collecting the Minimates all along, but hey... for 50-60% off I'm fairly pleased to have them. 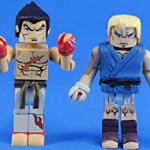 I continue to just buy the Street Fighter vs. Tekken Minimates simply because they exist and are only $1.50. Visually this is a little more appealing to most but it's still just highly derivative designs that aren't very exciting. Wow, it's "Ryu and Sagat had a baby" vs. "Blue Ken!" Get your quarters out now! It may just be that Tekken doesn't have as much mainstream appeal as Street Fighter, which is why these lasted all the way to clearance. 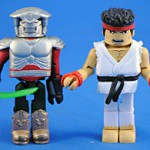 Ugh, ANOTHER Ryu... so, so, so happy we get ANOTHER Ryu rather than a first Blanka or Dhalsim or E. Honda or Vega or Balrog or just about literally anyone else. The silver guy is a silver guy, alright. For a dollar fifty I suppose I really shouldn't be complaining. Kind of a bummer I never got the TRU exclusive sets now... the orange para-military guy and bear sure would be fun to have. 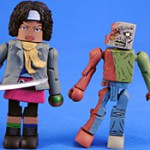 I was absolutely shocked to find this set since it comes from Series 2, and though I would prefer the TRU Exclusive set with Lori which I never found I'll certainly take this! Michonne is pretty solid though her hair rides a bit high and pops off easily. The One-Eyed Zombie is neat, though a little over-sculpted for my tastes. Interestingly, on his right check, below his empty eye socket, is a peg hole. Michonne's sword doesn't fit in there so I'm not really sure of the point or intent but it certainly is there. 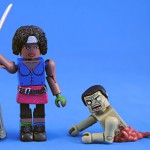 This is a novel set which includes the same hairpiece as above for Michonne which allows you have her with or without the poncho - nice. The Crawling Zombie is pretty well done and I highly appreciate that he comes with interchangeable entrails and legs. Thus, it's totally worth doubling up on this set since both 'mates get alternate look! Good on ya, DST! The entrails are a fun little new piece, though there isn't much balance to them so the Zombie has to keep both hands on the ground to remain propped up. Still though this is one of the more enjoyable Walking Dead sets yet. 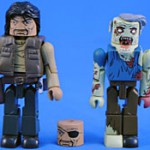 Oh Governor... that maxi-arc is ostensibly what turned me away from The Walking Dead comic (and killed my interest in the show) since I just derive so little entertainment from watching awful things happen to good people. I appreciate that this figure comes with alternate heads but if memory serves he either "two eyes and two arms" or "one eye and one arm" so it's a real bummer they didn't include the "stump" from Doctor Kurt Connors here. Jaw Zombie is another solid zombie, and though I haven't tried it I presume the sagging jaw is removable and I might just prefer that look for him. 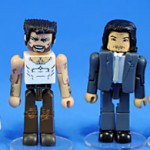 Still haven't seen The Wolverine yet but what can a man do when faced with Minimates priced at $1.50 a set!? Street Fight Wolvie is pretty familiar but pretty nice, and I appreciate that he gets bare and coated arms as well as clawed and un-clawed hands. Shingen Yashida has a pretty good likeness and he gets a katana sword. He's the real star of the set, since he comes in a basic business suit so I bought both sets I could find since that body is something that will be VERY handy to have duplicates off for some customs - most prominently... a simple head swap with Iron Monger means I finally get a proper Obadiah Stane figure! SWEET!!! 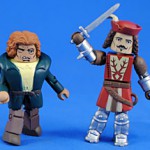 After almost missing out on the Mummy set I decided that it was worth to pick this up as insurance against me not getting around to buying the Hunchbank 4-pack. Both of these figures are remarkably good. Nice designs, nice sculpting a great color choices! My only complaint might be that Quasimodo's torso piece completely limits his head motion so sadly he can't look up from a proper hunch. Still though the space left in his skirt allows his legs ample range to crouch. Phoebus is just plain cool looking. From the neck down he's a medieval badass and the neck up is classic Hollywood dashing hero. Once I get the 4-pack I'll likely headswap this one to make some kind of kickass Knight. 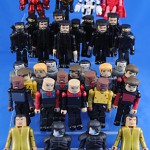 I was thrilled to find the AvX 4-pack since effectively all four figure have parts for alt-looks. Then, of course... Suit Wolverine versus Ninja - of course I bought 5 more of those sets - I LOVE the black suit with trenchcoat look and the Ninja is an army-builder, but much more importantly - now I have 10 black Minimate bodies I can use as blanks to fill in things like the Terror Dogs or various Iron Man armors, freeing up the fully decorated figures inside to be displayed! Huzzah! And best of all, so many Trek Minimates! Since the bodies are all relatively generic uniforms there's lots of swapping you can do to create stuff like Vest Picard, "Trials and Tribble-lations" Sisko and even TNG uniform Janeway. My only regret is that I could find more of the Picard/Hugh sets!

And here we stop, gentle readers, because this week's Spoils is SO MASSIVE that a single post will not contain it. Return tomorrow for Part 2 of Spoils 135 featuring the things I found in every TRU I could reach.

4 Responses to Rustin's Spoils of the Week #135