Well, today I did something new. After the abysmal fail at Lego I had a growing sense of need-for-accomplishment and by the end of the day and resolved to do the unthinkable... wake up at 4am to go get in the line for tickets to Hasbro's booth. 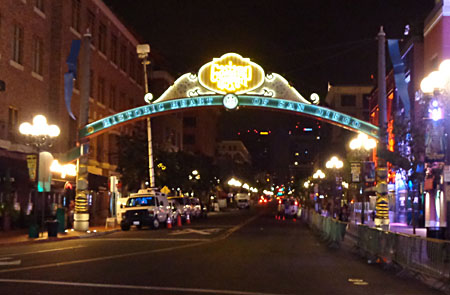 Considering that I'm quite the opposite of a "morning person" and that my hotel is, like, five miles away it's pretty good that I got downtown by 5am. Plus, a stellar perk of arriving that early is that I was able to park in a structure much closer to the Hall than I've ever had the luck to do before! It's almost tempting to run these crazy hours again just for that!

The Gaslamp Quarter at 5am is an odd experience. All of the marketing is up and illuminated but the crowds are nowhere to be seen. Off I went to the back of the Convention Center to find and embark upon the endless torture that is the Hasbro line, but that turned out to be a waste of 10 minutes as "they've" now figured out a far better system. Adjacent to the infamous Hall H line is another line for the upstairs/Sails Pavilion. At about 6:30ish, I think, they start ushering in that line and once upstairs you're free to split off to whichever other line you want too - Studio freebies, Ballroom 20, Exhibitor Hall or even Hasbro. They sent us outside into a fairly convoluted but well managed (via guys with signs) queue which at no point stopped moving. And thus it was within a minute I had my ticket to enter the booth at 2pm. Mission accomplished, I got in the line for the Hall (and much closer to the front than yesterday too) to begin my two-hour wait for the doors to open - all the while praying to the collector gods that nothing sells out at Hasbro before I get there. 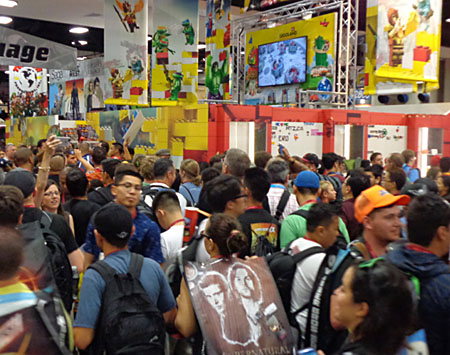 Once the doors opened it was straight to the Lego booth once again, and once again was met with chaos and "line closed" despite the hall only being officially open for 10 minutes. To add total insult to utter injury, less than half an hour later I was witness to a guy selling his Lego exclusive to a booth for $200. So it's really nice to know that it's the true fans scoring these things... why do you make such a ridiculously low run of these sets, Lego!? MAKE A REASONABLE AMOUNT OR DON'T MAKE ANY AT ALL!!! 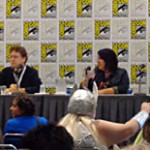 Mattypalooza is kind of my most looked forward to toy panel because they actually cover multiple brands with that one, so it's really a "something for everyone" affair. Except, well, this year the writing is on the wall that Matty's days are numbered so with little other than just more MotUC there was much to be excited about before walking in... and the panel didn't really change things. It started off with a decent "all toylines must end" video with some fun poses and VFX. Then Scott just had to play it again, to no crowd enthusiasm. Some fun highlights are that the "Super Powers Riddler" card will be all in Spanish and that they have created a "New Adventures" look for She-Ra. On the weird side, they way over described the DC comicbook plot, so there is no reason to read it now. The "big" news is that Dark Horse is working on a comprehensive art book covering the entirety of Masters of the Universe, and what they said and showed seemed very cool! I was most intrigued, though, by a fleeting tease for Real Ghostbusters stuff coming in 2015 - so fingers crossed for 6" figures of the guys! So, despite the book and the Ghostbusters bit there was nothing really spectacular, exciting or even unexpected revealed. So... yeah. 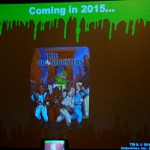 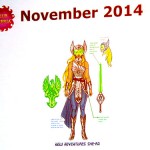 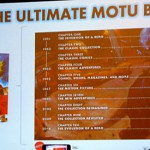 Then it was time for the Hasbro Star Wars panel. Fortunately this year it wasn't a desperate, audience-misunderstanding, long-winded Angry Birds pitch, but boy were they just all over Rebels like Jabba on Slave Girls. I'm not a fan of Clone Wars at all, really, but in the promo video they showed Dave Filoni really hypes the Ralph McQuarrie influence on the show, and the designs definitely reflect it. I'm a huge McQuarrie fan so I might not only get the toys... but check out the show too! The big news was the reveal of the next series of 6" deluxe figures which will be Hoth themed - Luke & Wampa with Han & Tauntaun, and still $40 each! That seems like a hell of a deal all things considered, so let's hope things do change too much on that. They also revealed a new "Dagobah Cave" Vader and a pretty novel Clone Trooper painted like Dr. Doom for the 3¾" line. 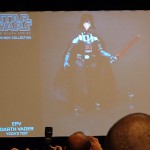 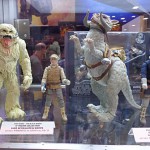 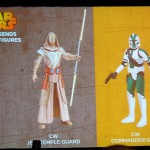 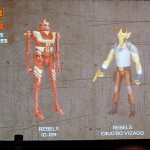 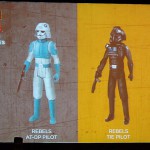 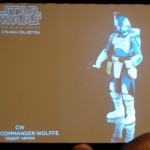 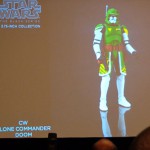 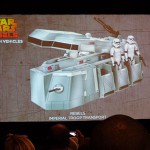 I then booked it to the Hasbro booth and got there a little before my slotted 2pm window, but since the line was low the attendant let me in just the same. I'm always reminded of Quint line in Jaws, "that was when I was most scared... waiting for my turn," whenever I get in to one of these these booth lines. It becomes a highly stressful, ticking clock wherein at any moment they could announce a sell-out on any given figure/s and then all would be for naught. But today was not that day! Insanely, I managed to walk out of there with everything on my list! So, while I am super relieved and jazzed for that success, I am a bit bummed... because I played their damn game and it worked out. So now I guess I will always have to get in line at 5am... which I hate. 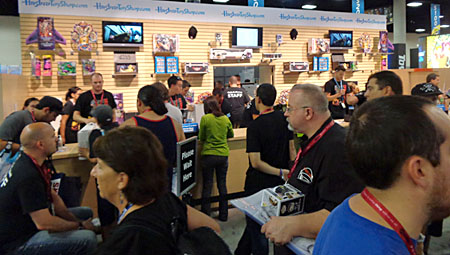 Funko has a now-notoriously abysmal booth line that is near on impossible to get it. This year they even got a second both space to have cattle lines but that made precious little difference, in part due to the fabled "Old Biker Guy" that runs the cap and arbitrarily lets people in whenever he feels like - con-goers abhor such chaos. At any rate, on a whim I decided to swing by very close to the Hall closing to check, and lo and behold... There was a different line-cap guy and he let me in! Of course by that point in the day 95% of the POP! exclusives were gone, which is a bummer as I was hoping to get a number of them. But POP! is more of a "cause it's there" thing for me so I was just relieved that my more-wanted ReAction and Legacy Collection exclusives were there - and in large volume (suggesting low interest or over-production, alas)! 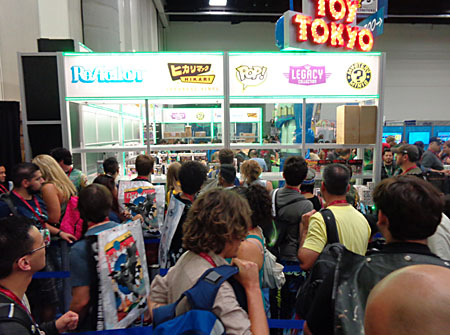 So there you have it... By the end of Friday I had pretty much all of my major exclusive figure goals in hand. It's still a very frustrating experience, and I do have "most," not "all," and then there is the whole 5am thing... I'm still not sure how I feel about that. But nonetheless, toys were had. 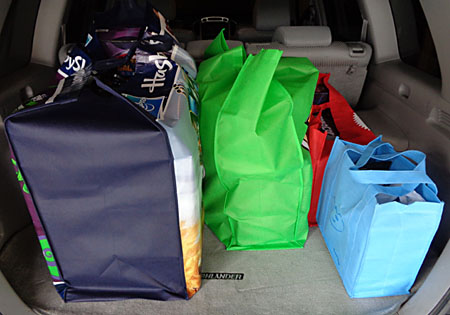