Sunday this year felt very light to me, very relaxed. Having scored effectively all of my exclusive-toy conquests, and there not really being any appealing panels, it was a pretty kicked back sort of mood anyway. Plus, being fairly tired and having a ton of toys to move out of the hotel room this morning I didn't get to the Hall till around 10... but once I did, you better believe I just dove right back into shopping! 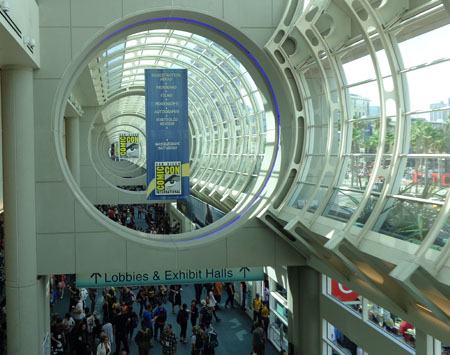 With little pressure to get things done I finally decided to take a leisurely stroll around the two prop auction booths, both of which have quickly become favorites of mine over the last year or two. Profile in History had a bunch of neat stuff, though overall wasn't as impressive as previous years. 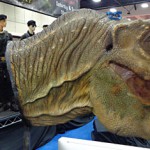 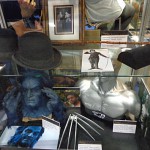 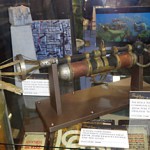 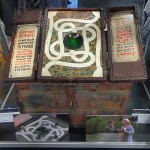 They did have a full set of costumes from Expendables and T-Rex head from Jurassic Park, though it did seem relatively a little small and kind of off-model so I'm not sure exactly what it is/was. They also had some of Charlie Chaplin's iconic hats and cane, plus a spear gun from 20,000 Leagues Under the Sea and the game board and case from Jumanji. 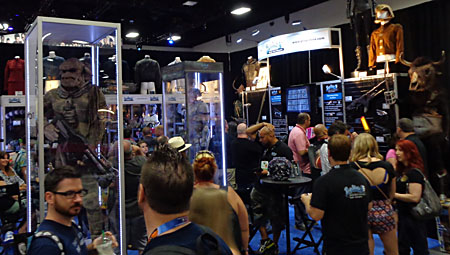 Over at Prop Store was a much stronger showing, at least for my tastes. They had one the "gargoyles" from Jabba's Throne, which was very cool plus a robot helmet from The Black Hole, Nicholson's Joker-Copter and even the G-D Sandworm from Beetlejuice!!! But the real centerpiece for me, of course, was the Mangalore suit from The Fifth Element! Last year they the ZF-1 and the Mondoshawan head and this year the Mangalore... man, I wish I was rich and could afford such things! There was also an awesome collection of sci-fi guns and one of Marty's hoverboards, to boot, plus much more to tickle and tantalize the fan. See, this is what Comic-Con should have more of... less commerce and more fandom! 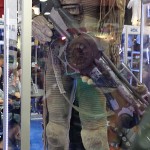 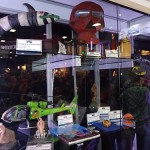 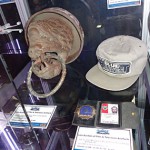 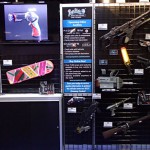 While wandering about I passed a booth that had a bunch of the Eaglemoss Star Trek ships up on display. As a huge Trekkie this line has been tempting ever since its announcement, but seeing these in person has broke and I will have to sub-in soon. The ships look great, of excellent quality, but it's there size that finally convinced me. I was expecting them to be closer to the size of the diecast ones from Johnny Lightning but these are larger, closer to... well, not quite Action Fleet size but certainly big enough to better warrant the $20 pricetag. 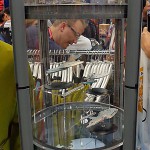 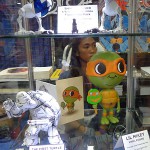 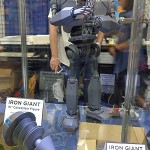 I also swang by the Mondo booth to scope out their prototypes for their new collectibles line. The cutesy Michaelangelo is also much bigger in person that I expected and turned out pretty darn adorable. They also had 1:12 comicbook-style mousers on display, which is just weird... so... maybe they're doing the turtles in that scale? The vinyl figure based on Eastman's first turtle sketch is pretty amazing though, and I'll definitely have to get one. The real show-stealer was the Iron Giant though. I discovered the movie on video so I missed out on Trendmasters line so I have a huge hole in my collection around this property and this (12"?) figure just looks amazing!

After a couple hours I headed out to make a drop at the car and grab some lunch. While I was eating I reflected on the trip so far and realized I'd pretty much grown weary of the con floor, and that the Game of Thrones thing was pretty cool so I decided to go check out everything else around the area that is related to the Con but not directly attached to the Hall. First stop was a big carnival-like area just south of the baseball stadium (and accessible via that giant overhead walkway to the Convention Center I've seen for years but have never used). It had a bunch of... booths(?) for a wide variety of things - movies, TV shows, even hotels and restaurants. You enter past a little Sleepy Hollow thing, complete with headless horsemen guys walking around for photo ops. There were a bunch of old cars to hype up Sin City 2 (not working, guys) and Pizza Hut had even built a psuedo replica of the old Shell Shooter toy to tie-in with the awful-looking new Ninja Turtles movie (Fun fact: I passed this on a flatbed truck while driving down to the Con on Wednesday). This whole space is anchored by the "famous" [adult swim] Funhouse - which was WAY bigger than I imagined! The line was quite long and I couldn't get a ticket so I missed-out, but assured - this is high on the priority list for next year! 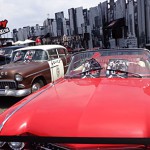 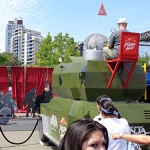 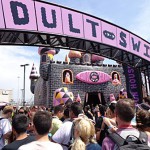 As I was leaving I noted a crowd around a little stage (sponsored by some hotel chain, I think... I guess everyone just wants a piece of the SDCC pie these days) so I swung by to see what was up and lo and behold it was George RR Martin being interviewed! I can come towards the end of the "panel" so the moderator asked for "one last" question from the audience as I walked up and Martin was asked something like, "what's the best part of our success?" I expected a hokey answer for such a hokey question but I was really impressed by what he said, which was that basically the whole world is open to him now. He grew up very poor in New York so his "world" was only five blocks big, the distance from his apartment to his school, and that's what turned him on to fiction and fantasy - it was an escape to a bigger, bolder world. And now he's invited to travel the world for signings and talks, and been to many places he never imagined he'd ever see with his own eyes. Very cool stuff - very "real" and personal. 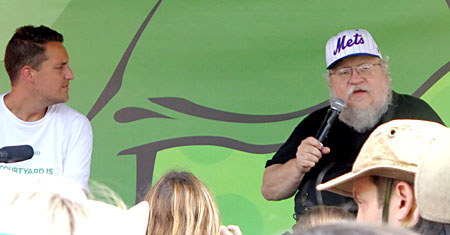 He did finish that up by saying that whenever he announces he's going to do a signing in Europe or China everyone just gets angry that he's not writing instead. To close, the moderator asked what three things Martin would want to have with him if he were stuck on a desert island, to which Martin immediately said "well... a boat." Awesome! 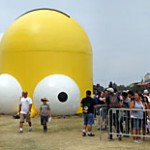 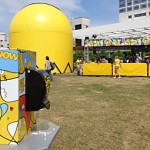 From there I crossed back over to the Hall and swung out behind it to see what was going on there. On the big grassy area that held the Batmobiles last year was a big Homer Simpson head to hype up the new distribution deal, or whatever it is, they have coming up. Apparently inside the head was a screening room but I didn't bother with that line. One thing back there that they did have, though, was so shockingly, astoundingly brilliant that I can NOT believe no one else has ever done this - they took one of those mobile hand-sanitizer stations and filled it with sunblock! Brilliant!!! Well, moving along there was a big Godzilla "art" exhibit directly behind the Convention Center, the centerpiece of which was a 2-story tall physical recreation of that teaser poster from last year with rubble forming Godzilla's silhouette. They also had one of the new "storm proof" cars from whatever the new Storm Chasers b-movie is that's coming out, but I was much more excited to see the guys who made the life-sized MODOK for the Masquerade last night were out there showing him off - too cool! 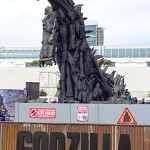 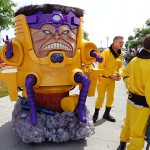 I decided to continue on the circuitous path I was on, and headed down to the Hyatt, which I don't think I walked down to since... 2002 or 2003 maybe? I was on the water side and as I came around to the back of the hotel I stumbled upon this massive monster! I presume it's for some new video game, but it was damned impressive to behold! Apparently the Hyatt is the pseudo home to videogaming at SDCC now based on the signage I could see. It's actually pretty confusing as the hotel is really poorly laid out and it was super tough to find a way out through the front between the basic layout and they security guards blocking access to seemingly necessary paths. One thing I did stumble upon in my quest for departure was a plexiglass case with stuff they dug up from the New Mexico landfill that's supposedly the home to a bunch of Atari E.T. games! So... spoiler-alert, looks like it was. 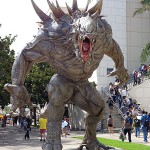 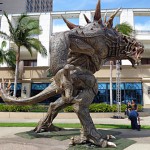 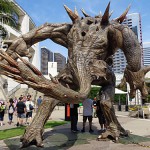 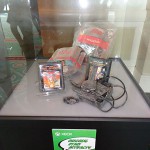 And with that I feel like I've successfully accomplished San Diego Comic-Con 2014! I headed up to the restaurant where I meeting some old college friends for a seemingly now annual end-of-show dinner before I hit the road and head home. Thanks for the memories SDCC - one more year down, one more epic load of toys purchased!