Yet another survivor who has lost his family, Abraham is ex-military, and is highly skilled with most weapons and in hand-to-hand combat. 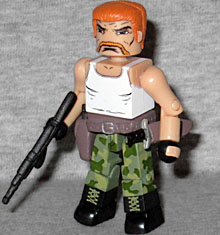 He is traveling to Washington D.C. with Eugene to halt the outbreak.

Hey look, it's the guy who appeared on the tv show this past season! Some of the tv characters may not look much like their comic counterparts, but there's no mistaking that Hulk Hogan mustache! He's wearing a white tank top and camouflage pants, and has black army boots and black gloves that leave the back of his hands exposed. The Minimate gets a new brown belt with a holster for his small black pistol and a sheathe for his big freaking knife! The pistol is really loose in the holster, but the knife is secure. He's also armed with an AK-47, because why would a US soldier cut off from everything not have a Russian gun?

Survival tip: a military base is frequently the last refuge during a zombie outbreak, but it is always overrun in the end. Any large gathering of people, weapons and vehicles 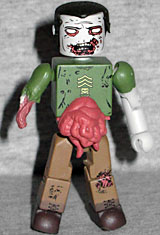 will draw attention from the horde.

That's right, zombies love weapons and vehicles. That's why you always want to avoid car dealerships. This Minimate is based on one seen in the middle of issue #54. He has short black hair, and is wearing a green shirt with a faux-military symbol on the chest: it has three chevrons above a skull and crossbones (in this case, a Minimate skull and two crossed rifles). His clothes are rumpled and dirty, and his knee is skinned. His right arm is torn away, which is not how he looked in the comic, but there's a plain arm if you're feeling less adventurous. The exposed guts can be removed as well, allowing you to control exactly how inhuman you want this walker to look.