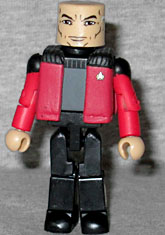 As Captain of the Enterprise-D (and later the E), Jean-Luc Picard made first contact with 27 different alien species, including the Ferengi and the Borg, and was the main contact with the omnipotent Q Continuum.

Okay, Sisko and Janeway were nice, but now we get to the real captain! This Picard is one of the most versatile Minimates ever. Right out of the package, he's wearing his captain's jacket, which isn't exactly an iconic look, but it's a look, and that's enough.

The jacket is a separate piece, so you can remove it for "mildly 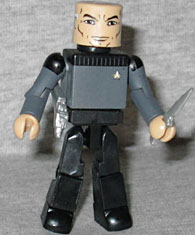 casual" Picard. Of course, you also have to remove his arms, but thankfully the set includes a second set of grey arms to replace them. Taking the jacket off also gives you access to the peg on his waist where you can plug in the included phaser.

This particular variant of the captain's uniform first appeared in "Darmok." One of the greatest episodes of television ever made, and yet TNG executive producer Rick Berman hated the premise of it. Imagine! Remember, kids, no matter how important or involved you are, it's still possible to be wrong. Anyway, in honor of the episode of origin, the set also includes the dagger Dathon gave him.

But if you want a more traditional Picard, the set still has you covered. The red arms you removed before can be attached to the included red-shirted 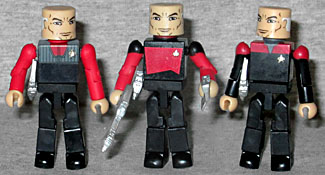 torso. For full authenticity, there's even a red and black collar that fits around the neck peg, for maximum screen-accuracy. And of course, you can swap out the other captains' torsos, if you want him to be wearing either of those uniforms. Variety! The set also includes a phaser rifle and a tricorder. The only thing missing is the the flute that Captain Picard played, first in his imagination, and then in real life, in the episode "The Inner Light" from Star Trek: The Next Generation. 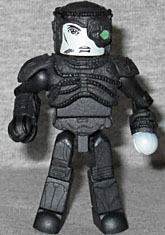 Formerly known as Third of Five, the Borg drone "Hugh" was found at a crash site by the crew of the Enterprise-D. Befriended by Geordi La Forge, he was later returned to his Borg cube with a new sense of individuality.

Hey, it's Hugh! i.e., the only Borg (other than 7 of 9) who gets a name. He's the second Borg-y Borg Minimate, which sounds like a sentence written by the Swedish Chef, but you know what we mean: pale white skin and dark grey technology. 7 of 9 looked like a girl, Hugh looks like a Borg. Only his face and his left hand are visible, and he has unique gloves, waist cap, chest cap, and head cap.

If you take that off, you can see the painted silver tech that covers Hugh's left eye. Hugh, whose name is a pun on a mispronunciation of "you," was played by Jonathan Del Arco, who had also auditioned for the role of Wesley Crusher, which means in some alternate reality, he's the one who worked so hard to declare himself HNIC of the internet.

Like Rustin said, it's a shame this Picard didn't come with an armybuilder figure, because he has enough different looks that it might be worth having multiples of him. Heck, stick with the Borg theme and sell a variant that comes with Locutus instead of Hugh. The other captains in this line were nice enough, but Picard is really great.