The metal mutant Colossus was one of five X-Men possessed 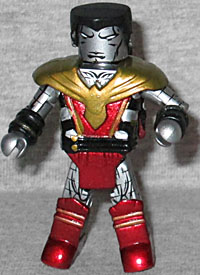 by the Phoenix Force. Already super-strong in his steel form, there were few who could defeat him as a member of the Phoenix Five.

Boy, Colossus' storyarc between Fear Itself and "Marvel NOW!" was basically just "he cosplays someone else," wasn't it? First Juggernaut, then the Phoenix. You can remove the chest cap (and the waist extender) if you want a plain Colossus, but why would you want that? The cap has the large, golden, bird-shaped shoulder armor over the red tabard and loincloth. Since the chest cap needs to have gaps in the sides to accommodate the arms, the straps don't go all the way around his ribs, breaking the illusion. He does have molded boots and wristbands, though. 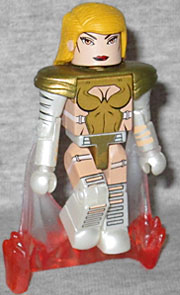 Emma Frost is a powerful telepath, and her power was amplified when she bonded with a fragment of the Phoenix Force. As one of the Phoenix Five, she transformed the Earth and drove the Avengers underground.

Emma Frost's Pheonix costume doesn't work too well as a Minimate. In the book, her costume looked stupid and porny (befitting her character), but the lack of feminine shapes here means it doesn't translate properly. It also doesn't help that her waist block is molded in white rather than pink, or that they seem to have given her Magik's hair insead of her own. Really nice work on the cape, though: it's clear plastic, given a solid white spray at the top to look like cloth, and orange at the bottom to look like flames. It's designed perfectly to hold her up in the air slightly.

Finally, it must also be noted that, much like the fourth Thundercats Minimates four-pack, this set corrects an earlier error. Remember how Phoenix Cyclops had golden armor instead of the red it should have been? This set includes that same piece, done in red this time. It's not meant for either Colossus or Emma, so clearly it's meant to give Scott his intended design. Art Asylum could have just let the error stand, but instead they corrected it.

Now if only they'd release Phoenix Five versions of Namor and Magik, to correct the error of us only having the Phoenix Three-Fifths Compromise.