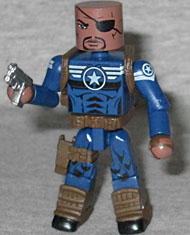 U.S. Army officer Marcus Johnson had no idea that he was the son of former Director of SHIELD Nick Fury. He has the Inifinity Formula in his bloodstream, giving him superhuman agility, speed and strength.

Recognizing that "people who read Ultimate comics" was a dwindling market, Marvel set about turning the real Nick Fury black so he'd be more like Samuel L. Jackson. Since a Black Like Me shoe polish dye-job was out of the question, they introduced a new character, burned his hair off, and poked out his eye. That seems a little excessive, especially now that the dregs of the Ultimate universe are being folded into 616 thanks to Secret Wars.

Nick Fury Jr. showed up when Steve Rogers was going back to 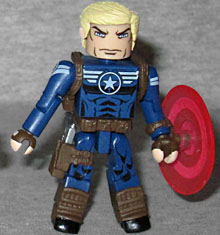 being Captain America, so he wears Steve's old "Commander of SHIELD" blue uniform. It's painted with a lot of nice details, and gets new boots, a utility belt, a shoulder harness, and a thigh holster with a silver pistol.

It's kind of a shame Art Asylum never got around to making a Commander Steve Rogers Minimate, huh? We've got little Nicky wearing the suit, but never a Steve. And they probably won't make one now, right? Well, good thing this set includes extra pieces to make Steve Rogers, then! We get a white head and hands, blond hair, and a translucent shield that can plug onto his glove. Well played, AA! 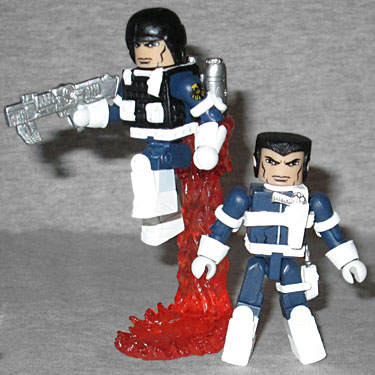 We already had some plain SHIELD Agents in Series 48, but this is the Heavy SHIELD Agent, which refers to his armor and weapons, not the way he's been hitting the snack table in the Helicarrier break room. He gets a new helmet and tactical vest, which he wears over the normal SHIELD uniform. He also gets the gun, jetpack, and exhaust plume seen with Age of Ultron Nick Fury. Alternately, you can take off the heavy armor and replace it with the normal chest holster, for another standard SHIELD Agent.

Of course, you know that an army-builder figure typically means a variant figure is coming - you're right! 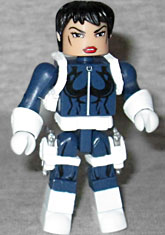 A respected SHIELD agent, Maria Hill was named Director of SHIELD when Nick Fury went into hiding following the Secret War. Although no longer Director, she remains a frequent liason with the Avengers.

There was already a MCU Maria Hill, but this is our first 616 version. She's got a fairly plain blue and white uniform, but hers is painted with girl-boobs. Instead of a chest holster, she just gets the shoulder harness and two white holsters on her hips - but that also means she's dual-wielding pistols!

I poke fun at Rustin for wanting to buy multiples of Minimate sets just because they have alternate pieces, but this is one case where he's right: due to the fact that Nick Fury Jr. and Steve Rogers are actually different characters, not just the same guy in a different hat, it makes sense to buy more than one set. Add to that the alternate looks for the Agents, and the inclusion of Maria Hill as a chase variant, and you've got a really nice set!