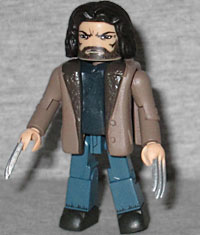 After he was forced to kill the love of his life, the Phoenix-possessed Jean Grey, Wolverine was tormented by her memory and traveled North to Canada, finding solitude outside of a small town in the Yukon.

Dirty Hobo Wolverine is #46, and finally answers the question of whether he cuts his hair to look like that, or if it just does it on its own. He has a long, shaggy mop

of hair, which appears to be a new piece: the lower edge is flat, allowing it to butt right up against the hood on his brown jacket (also new). If you take the chest cap off, he's wearing a sweater or sweatshirt beneath it. His claws are very nice, but the set includes plain hands if you want them.

An emissary of the elder Yashida, Yukio tracked down Wolverine 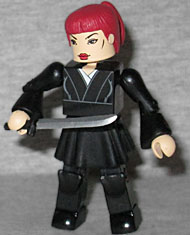 in the Yukon, bringing him back to Japan to hear the businessman's offer. Yukio is also a highly trained martial artist.

She sure is - in more than one reality! In the comics, Yukio had spiky black hair and dressed all in leather - she was the one who convinced Storm to get a mohawk. The movie kept the attitude, but gave her red hair and, at least while she was physically in the Yashida household, this rather demure black kimono thing. It's got the robe sleeves and a new skirt that's open on the sides. She was wearing boots with this outfit, so she has pieces between her feet and shins to duplicate that. And naturally, she's armed with her sword.