Minimate Mini-Review #261 - Bring Out the Gimp

Boxer Butch Coolidge did a bad thing - he double-crossed gangster Marsellus Wallace. Now a chance encounter and a long foot chase have led both of them to the basement of a pawn shop, where they find themselves at the mercy of a new enemy: Zed. Will they escape, or end up like The Gimp? 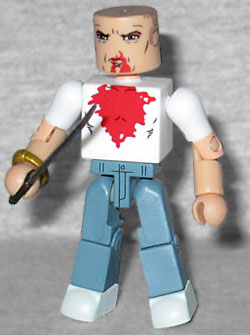 This brings our total of "Bruce Willis properties to become Minimates" up to three. And since Pulp Fiction was made in 1994, this one still has some hair! Granted, it's just a bit of stubble, but here it is, painted on both heads (more on that in a bit). The tampo overlaps his ear slightly, but luckily, the blood running down his face and staining his shirt draws attention away from it. He's wearing blue jeans and plain shoes, and because it was the entire point of the scene, he's got his great-grandfather's gold watch. The set includes a katana, because that's a cooler weapon than a hammer, a baseball bat, or even a chainsaw.

Marsellus Wallace highlights a problem of the Minimate style: 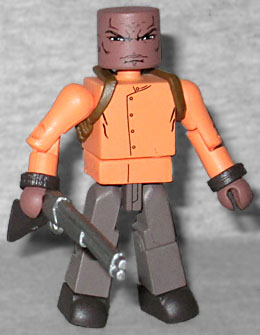 Ving Rhames is a big, imposing man who looks like he could pick up and snap-in-two any other character in the film, but in Minimate form, he's the same size as everyone else. They did a nice job on him though: he's wearing his peach button-up shirt, brown pants, and darker brown shoes. He has a shoulder holster (reused from one of the 24 figures) and a waist piece to create the untucked lower edge of his shirt. He has a very unhappy look on his face, which probably has something to do with the leather restraint cuffs on his wrists. Art Asylum remembered to paint the earrings in his ears, so of course they also got the bandaid on the back of his neck. He gets armed with the shotgun he took from the departed Maynard.

Butch and Marsellus both get alternate looks, 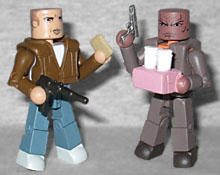 from before they reached the pawn shop. Butch, as we mentioned, has a second, non-bloody head, and both of them get jackets and matching sleeves - just be sure you turn Butch's torso around so that the white is showing, not the red. Marsellus gets a silver pistol, perfect for firing wildly on the street, and Butch has the machine gun he took from Vincent. Amusingly, both men get food, too: Marsellus has a new hand molded with a box of doughnuts and two cups of coffee, while Butch has a small brown object that, at first, was hard to identify - it's one of the toaster pastries he decided to make when he went back to his apartment! Minimate Pop Tarts; who woulda thunk it? 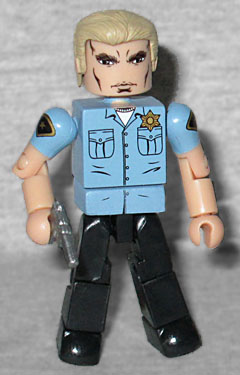 Zed is the only thing even close to law enforcement that we see in Pulp Fiction (he's a security guard, not a cop; you know what the LAPD actually wears, and it's not this). He was played by Peter Greene, the emergency backup Jay Mohr who was also the villain in The Mask. His light blue shirt is untucked, and painted with lots of tiny wrinkles - it's not as nicely tailored as Marsellus' was. The badge on his chest and the logos on his sleeves get picked out with gold paint, while his pants and shoes are solid black. His blonde hair is slicked back, and he has the set's second pistol.

Pulp Fiction was the most influential film since Citizen Kane (though, 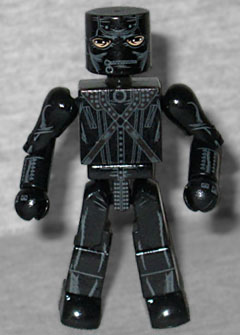 if the Academy of Motion Picture Arts and Sciences is to believed, it's not as good as Forrest Gump), but one thing that Tarantino probably wasn't expecting to be a trendsetter was The Gimp. It's never explained why Zed and Maynard call their slave The Gimp - he didn't seem to have any problems with his legs - but apparently people were unfamiliar with the term, and thought it referred to his sexual role. And that's why today, the kind of full-body bondage gear he wears is colloquially known as "a gimp suit." The Minimate is fully black, and painted with dark grey details: highlights on his arms and legs, and various details of the suit. It would have been nice if they'd done some silver for the studs on the costume and the zipper over the mouth, to help them stand out.

There's only one downside to this set: with all four of these characters already produced, there's no way we'll ever see a Maynard to complete the scene; after all, who could he possibly come with?

2 Responses to Minimate Mini-Review #261 - Bring Out the Gimp