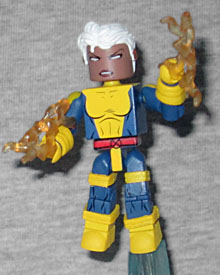 Ororo Munroe's ability to control the weather earned her a place on the X-Men, but even when powerless, she is a formidable opponent.

She is, but that's neither here nor there - she lost her powers, got them back, was turned into a mostly powerless child, and re-aged to adulthood, but all of that happened before she put on this costume. While most of the team adopted the yellow-and-blues in Uncanny X-Men #273, she was still wearing her '80s costume until she randomly changed (while deep in the middle of Shi'ar territory) in #276. Below the neck, the figure is identical to Jubilee, and she has Tony Stark hair in white. We also get a blue flight swoosh and two yellowy-orange lightning bolts for her arms.

Little is known about the background of Greek mutant Dominikos Petrakis, 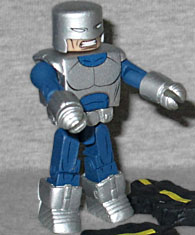 except that he creates seismic waves that can cause earthquakes, alter terrain, and even crumble buildings.

Boy, Avalanche is just fated to get the "punny" names, isn't he? On X-Men: Evolution he was Lance Alvers, and in the comics his name roughly translates to "master of stone"? That's what happens when you have no backstory for the writers to play with. The Minimate is wearing his classic costume, consisting of silver armor over a blue suit beneath. The chest is one of the old powerhouse chests, from before those started getting fancy and anatomical. His boots and gloves come from Silver Centurion Iron Man, and he has a utility belt.

If you remove the chest cap, you'll find a silver torso with a big blue A on it,

referencing Avalanche's only other notable costume. That one also gets Domino's shoulder pads, to keep him from looking too plain. His helmet is removable, but in keeping with the paint issues that all my Series 60 purchases have come with, his helmet was apparently put on before the face tampo dried, so 1) it was stuck pretty good, and 2) half his face paint can now be found on the inside of the helmet rather than on the head. Whoops! To suggest his powers, the set comes with two chunks of rubble painted like asphalt.

Series 60 had a gimmick where most of the sets came with extra pieces to allow you to change one X-Man into another - in this case, bonus parts turn Storm into the psychic ninja Psylocke. 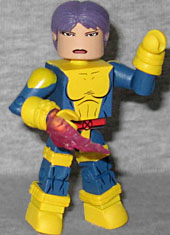 This is, surprisingly, our fifth Psylocke Minimate. Going in biographical order (rather than release date), we already had British version, armored version, '90s version, and X-Force version. The "unified" look doesn't really feel like an actual era, because it lasted so briefly, and because most of the characters reverted to what they were wearing beforehand - it's more like something they were wearing while their real clothes were in the wash. Betsy gets her psychic blade (the focused totality of her telepathic abilities), and hair with a ponytail. Her face is very stern, with a minimum of details.