Boss Fight Studios has sent out the remainder of the Vitruvian HACKS all-in Kickstarter rewards. Since we've already posted a review of the male body, now it's time to look at the ladies! 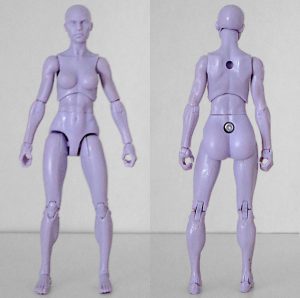 The body stands 4" tall - minorly shorter than the male. It's a slender yet muscular sculpt, suitable either for a bare body (thanks to the belly button) or a superhero's costume. The back is just as detailed as the front, because they didn't go nuts with the musculature (though just like on the man's chest, there are sculpted nipples). The only flaw, if you want to call it that, is the large screw at the base of the spine, holding the two halves of the hips together. At least the hole between the shoulder blades is intended to hold backpacks and such, not just a production artifact.

there's the bald head that's attached in the bag, but also a smooth masked head with no facial features other than the eyes; a head with short hair parted on the left; and a head with long hair in a moveable ponytail. The heads are mounted on double-balljoints and swap easily.

We also get three sets of feet: a pair that's bare; a pair that's wearing sandals, because the first series of HACKS is all about ancient Greece;

and a smooth, featureless pair that are, again, perfect for superheroes. These also pull out with no major difficulty, as do the two sets of hands: one with the hinge joint running horizontally, and one with the joint running vertically. To help keep the figure standing, we also get a Boss Fight Studio display base, and there are peg-holes in all the feet.

Although the female body is built similarly to the male, the difference in their relative sizes means that the pieces aren't interchangeable; any female arm can fit in any female torso, but you can't give a lady man-arms; you can (loosely) put a woman's head on a man' shoulders, but not the other way around; male ankles have the joint as part of the foot, poking up into the shin, while female ankles are part of the shin and poke down into the foot; etc. Lots of small differences, but same overall style.