Today we reviewed our first human figure from Zombie Lab Wave 3, Zoe. And now, we also review her Kickstarter-exclusive variant. 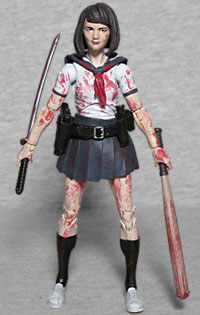 an adult woman in Hong Kong wearing a Japanese schoolgirl's uniform. Hey, we all make our own choices, she's just living her best life. Doing the shirt's collar as a separate piece that plugs in like a backpack is a clever move, helping to hold the piece in its intended spot and making it feel more like an actual part of the garment than it would if it were flopping around freely. But if it's been three years since the zombie attack started, who's been ironing the pleats in that skirt?

The big difference between the normal figure and this release is the way she's been totally splattered with blood: her shirt, her skirt, her arms and legs... there's no blood on her face, which we can accept if she just washed it off, but why on Earth are her sneakers pristine white? Like, not a speck of blood on them anywhere. It's all over her socks, but stops at the ankle? How does that work? 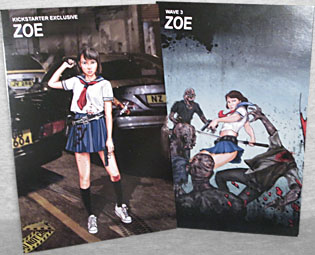 The accessories are the same, too: a police belt with pistol, a katana, and a baseball bat with a removable spiked ring. It's surprising it's taken us this long to get a sword, but even that piece is overshadowed by the coolness of the bat. She also gets an art card with Chapter 4 of the story on the back. The art here is different from the normal one, which is good: the figure of Zoe doesn't quite mesh with the background as well as it could, but at least she's not flashing her hiney this time.

One cool feature that we overlooked until now, however? The alternate cards for Jack, Ethan, Marian, and Zoe all line up to form one big image of the quartet fighting their way through the streets: