In addition to the male and female blank bodies, the Vitruvian HACKS Kickstarter also included a handful of skeleton warriors. 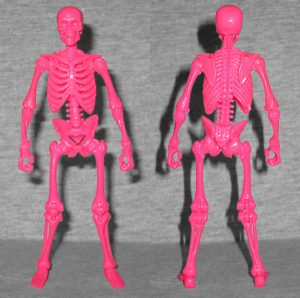 The skeleton stands a bit under 4" tall, making it smaller than both the humans - as it should be. It needs to fit inside all the meat, after all. The sculpt is outstanding, giving us as much anatomical accuracy as we could ever hope for on a toy this size. There are gaps between the radius and ulna and between the tibia and fibula, and a complete pelvic inlet. The front half of the rib cage is hollow, with spaces between the ribs, while the back is solid for better stability. This is the best we've seen since the Graveyard Skeleton. There isn't even a screw holding the halves together!

The skeleton does not come with extra pieces, the way the human bodies did - no extra heads, no extra feet, none of that. However,

the set does include some clear plastic lumps that serve an unexpected purpose: the skeleton is so skinny, it can't use the Vitruvian HACKS interchangeable armor; so these plastic tabs clip into the figure, adding just enough bulk to keep the armor from falling off. The female armor mostly fits fine, but the male armor definitely needs the help to stay. There are also two larger loops that slip over the feet, providing holes for the pegs on the display stand to fit into. 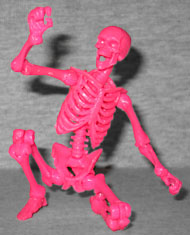 This figure is just as modular as the rest: the pieces may only fit into other skeletons, but they still come apart at all the joints. The skeletons have swivel/hinge joints in the ankles, hips, wrists, elbows and shoulders; balljoints at the top and bottom of the spine as well as the neck; a hinged jaw; and double-hinged knees. Double-hinged knees! On a 4" tall skeleton! That's insane! Despite their amazing thin-ness, the joints are tight enough to hold poses, but strong enough to survive vigorous use.

The skeleton is available in multiple editions, each in their own colors:

As well as the hot pink skeleton pictured in this review. It wasn't originally included in the Kickstarter - Boss Fight Studios threw it in as a freebie to make up for the long wait.

The skeletons ended up costing $15 apiece, which seems like a lot for a toy of this size, but trust us when we tell you that these things have some amazing quality. They're even better once you put the armor on them and turn them into undead soldiers.