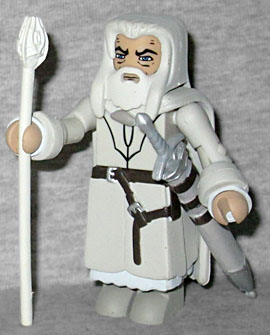 Gandalf the White, aka, Gandalf the Spoiler from the Trailers. He dies in the first movie, the second movie goes out of its way to make us think he's Saruman, but oh, don't worry, every ad on TV has already shown him alive and well. Hooray! Since he's human(ish), Gandalf gets the 2½" tall body, though most of it is concealed behind his big square robes: he has a cloak and a skirt piece that are both molded elements, while his chest is painted with shirt details. Around the wrists are pieces to create his oversized sleeves. If you take off his hair/beard combo, there's a surprisingly excellent Ian McKellan likeness painted behind it. Gandalf has his wizard staff, and a working scabbard for his sword - it plugs into his left hip. 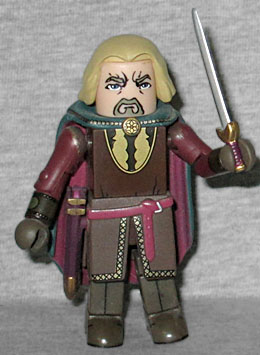 Look, it's the captain of the Titanic! (Not this one.) Only ToyBiz ever gave us the Decrepit Old Theoden toy that Rustin demanded, so this Minimate is him ready to lead the Rohirrim to battle. He's young(ish) and dressed in red and browns, as is the way of his people - these are his normal clothes, not his armor. Like Gandalf, he too has a cape and a skirt, though his are both shorter, meaning we see more of the actual figure and the paint that creates its details. Obviously it's not going to be as intricate as a real action figure would be, but by the standards of 2004 Minimates, this is above and beyond. Since actor Bernard Hill is a lefty, his scabbard plugs into his right hip - otherwise he'd have trouble getting his sword into the proper hand.