This November, there's only one choice

The US election is coming up soon. Clearly you can't vote for Trump, because he's a bigoted attention whore who's bankrupted every company he's ever touched and is actively courting white supremacists, and clearly you can't vote for Clinton because... she frowns too much sometimes? Sure, let's go with that. So your only recourse is to throw your vote away on a third-party candidate. But which third party candidate?

According to the Federal Election Commission, more than 1,900 people have declared their candidacy this year. That's four times as many as there were last election, in part because the FEC has started allowing people to file online. That means a lot of total longshot candidates, including one who's run for president before, in 2008 and 2012: Cobra Commander. 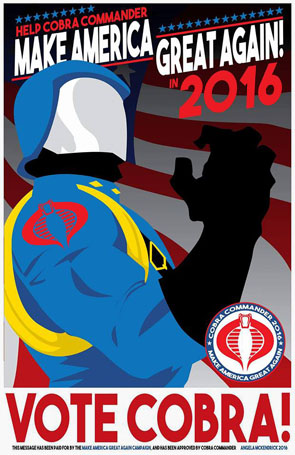 Yes, this November you can write in a vote for Cobra Commander, and it will actually count toward a real candidate.

This entry was posted in random and tagged Cobra Commander. Bookmark the permalink.