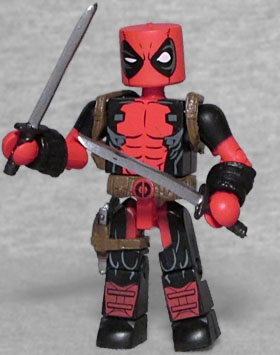 A "Merc With a Mouth," wise-cracking assassin Deadpool will take any job as long as he gets paid - and if it suits his erratic personality that day.

Deadpool's Marvel NOW! costume isn't significantly different from what he wore before: it's still a red and black uniform with lots of straps and pouches. And it's already had a Minimate, thanks to the Thunderbolts box set. This one just has his shin pads painted on, not molded, but the wristbands, belt, holster, and shoulder straps remain 3D. He's armed with a pistol, his two swords, and a hand giving the thumbs-up sign. There's also an alternate unmasked head based on the art of Tony Moore. 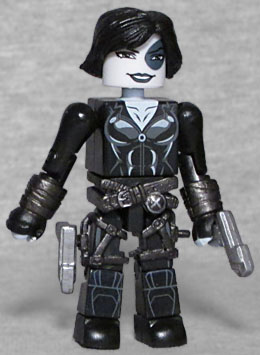 Vanessa Carlyle was a shape-shifter who once dated Deadpool. Speaking of poor judgment, she also became a mercenary, impersonating Domino to infiltrate X-Force.

Yes she did! In fact, we've talked about it before. This version of Domino is wearing all-black leather, without the white stripe seen on the older one. She has crossed belts and pieces on the thighs that her pistols can plug onto - unfortunately, it was designed to only go on one leg, so one gun will end up backwards. Her hands are molded with wristbands and raised knuckles, and she's got a cute smile on her alabaster white face. Her hair is short, but hangs down just enough to reach her familiar eye-spot. There's a bigger gun in the tray that can be used by either Deadpool or Domino. 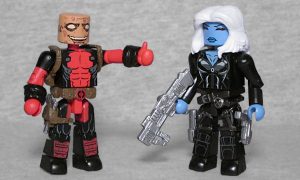 But since this is Copycat and not really Domino, the set includes extra pieces to turn one into the other. Somewhat like Mystique, Copycat's natural coloring is blue - a lighter, paler blue, but blue nonetheless. We get alternate hands, an alternate head (with longer white hair) and even an alternate chest block just so the bit of skin visible at her throat can be the proper color. That's attention to detail!