In Gotham City, the police are often powerless to act against the criminals who control the underworld, like the sadistic businessman Black Mask. Detective James Gordon, newly promoted in the force, means to change that, but he will need the help of Captain Sarah Essen and forensic investigator Edward Nygma to do his job. 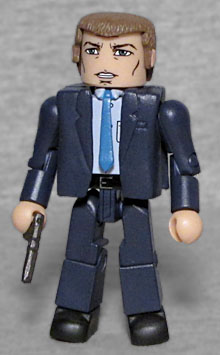 This is the second Jim Gordon Minimate, after the SDCC exclusive. This isn't a re-release, though, because instead of wearing a long rain coat, he's just got a regular suit jacket. And it's blue instead of black. His expression has been changed to one that's less "concerned" and more "upset." The set includes a gun and a badge-hand for him, just as before, but this time you can swap his arms to show him with his jacket off. Versatility! 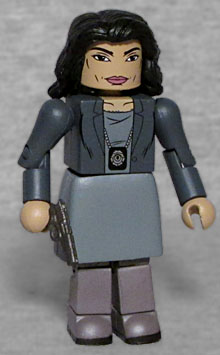 In the comics, Sarah Essen was a detective when Gordon was still just a lieutenant. The two began an affair, but she broke it off (and moved out of Gotham City) when his wife got pregnant. On Gotham, she was in charge of the whole precinct (and the fact she was played by a woman named Zabryna Guevara will probably clue you in that she wasn't a blonde white lady this time, either). The Minimate is wearing a grey dress and a darker jacket, with her badge hanging on a chain around her neck. She doesn't have any alternate clothing options, but you can feel free to arm her with the second pistol included in the set. 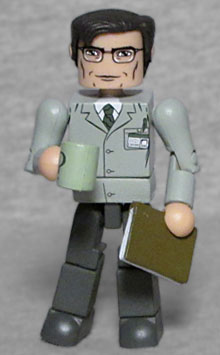 Gotham is set in the days immediately after Bruce Wayne's parents were killed, so it was a clever move to pepper a few villains into the world right away - or, a few "pre-"villains, really. Why should Riddler just come out of nowhere, when Edward Nygma could have been hanging around in the city for years? And what's very likely for a highly intelligent man like Ed? Police scientist! This is before he went off the deep end, though, so he's just wearing a short lab coat, not a green suit covered in question marks. No, that's reserved for his coffee cup. While his clothes are as drab as everyone else's, there is at least a little bit of a faint green tint here. The set includes a brown book accessory, which we take to be a file folder for Ed. 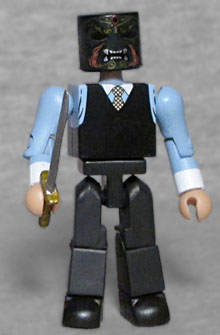 You can tell that Gotham was planning for a long haul right at the outset (and these Minimates are doing the same thing) - you don't drop fricking Black Mask in as your villain unless you're planning for a marathon, rather than a sprint. TV's Black Mask is Richard (not Roman) Sionis, and rather than a black face or a black skull, his mask is an ornate... I guess it's supposed to be a samurai mask or something, with its fangs and fine golden detailing? He's wearing the fanciest of business clothes: a blue shirt with white cuffs and collar, and a black vest. The set includes a coat and alternate arms, so you can dress him up further, but no unmasked head. No making a Dale Malloy The Riches toy for us! Going along with the Japanese mask, he's armed with a katana. 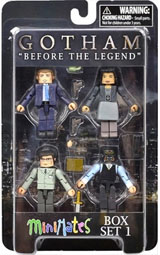 Gotham is a fun show, as long as you're willing to embrace the campiness of it (and if you have somebody to watch it along with), but I'm not sure it's ripe for toys: the aesthetic is just so uniformly bleak that you end up trying to sell a four-pack of characters all weraing black and grey, and packaged on a super dark backing card. It's hardly the most visually arresting thing to ever find its way to store shelves, so they're really counting on the name selling the set. Heck, I just said I enjoy the show, and it's still taken me a year to decide to buy the Minimates. What finally got me? The promise of the upcoming fourth box set, which finally brightens things up.