One of the rewards offered in the Four Horsemen's original Mythic Legions Kickstarter was a 48-page, prestige format art book. Well, delays plagued the project. Jesse Snider, the editor-in-chief of the group putting the book together (KCRO Studios), shouldered all the blame himself: scheduling problems meant the script got started late, which then meant the artists were already working on different projects by the time it was done... pencilling, inking, coloring, lettering, every step kept getting pushed back further and futher.

However, the book is finally off to the printer, so as a way of saying 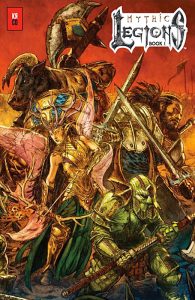 "thank you" to fans for our patience, KCRO and the Four Horsemen offered a PDF download of the book, so we could finally see the content we've been waiting for.

Journey to Mythoss, a poisoned paradise in the midst of great upheaval and meet the factions that threaten to tear the world asunder through sword and sorcery! With darkness looming on the horizon, the elves and naturalists of Xylona's Flock begin to form alliances with other forces of good, gaining the military might of mankind with the Army of Leodysseus. But forces of evil have already begun to stir. A plot carried out by the mercenary Sons of the Red Star leaves our heroes with more questions than answers, while the diabolical Legion of Arethyr waste no time in summoning the first of the Dark Four to lead their legions of orcs, goblins and trolls!

The first half of the book is a 22-page comic. Based on the Mythic Legions property bible, the story was writen by Greg Weisman. That's not the most famous name, 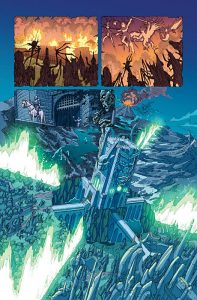 but you may have heard of some little projects he's worked on before. Gargoyles? Young Justice? Yeah, him. The tale shows us the legend of the founding of Mythoss - or, since this is a high fantasy world, possibly the actual founding of Mythoss. I mean, we know that in our world, most cultures' creation myths are just that - myths - but in a setting where actual powerful gods regularly interact with their subjects, who's to say this isn't literal history?

But this isn't set only in the past. In the present day, we see the forces of good renewing their ties, hinting at the pasts and personalities pieced together through the biographies so far. Of course, courtly intrigue would make for a boring comicbook, so then the villains attack and we get a major fight scene. Its all very well done, and quite honestly makes us wish there was another issue available right now. Or even on the horizon. Come on, Weisman, you're leaving us with questions that need answers! (Seriously, that's some good plotting; I want to know what happens!) 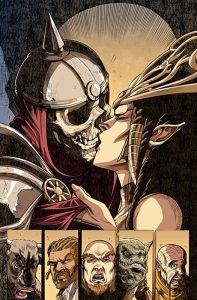 The art, by Axel Gimenez and Marcelo Ferreira has a rough, sketchy style that makes the story look aged and handmade - if this were a hard sci-fi story set in a perfect world of gleaming spaceships and Tron lights, the art would be out of place, but in a setting of stone castles and ancient trees, it's perfect. The layouts and character proportions are reminiscent of the work published by Aspen Studios (the Fathom people) after Michael Turner died, a statement that will only make sense to the dorkiest nerds in our audience. Or maybe the nerdiest dorks. Well, either way, it made perfect sense to me. Gimenez has worked on DC's recent Masters of the Universe comics, while Ferreira has done a lot of animated stuff and several IDW books, so this is not the first toy-based property for either of them.

Robby Bevard's colors are what really bring things to life, though. From the golden light of creation to the cool shadows of a garden at night, it's all done nicely. The major colors of the book are yellow and blue, matching the divide between brightness and darkness that is at the heart of the Mythic Legions story, and also providing depth to the physical space of the scenes, allowing us to fully appreciate the times when some characters are in lit areas while others are off in the gloaming.

The original solicitation in the Kickstarter promised "expanded bios and new background information on the world and the characters," 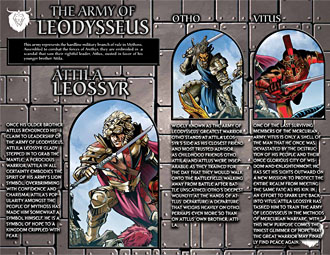 which didn't come to be. The second half of the book is filled with bios about the characters, but they're all exactly the same as what is published on the packaging. So it's great if you want to know about the characters you didn't buy, but it's useless if you want to know more about the characters you did. On the plus side, we finally get names and descriptions for the heroic factions, and I'm shamed to admit that I didn't realize all the groups were mirrored, not just Poxxus and Bassylia. The art in this section seems to be focused cut-outs from some larger scene, so we'd like to see that at some point.

The listing also promised "behind the scenes studio pictures, sculpts and design art from Four Horsemen Studios," and those we get, including a preview of the characters from Advent of Decay by Nate Baertsch. The "Attack and Defend-style tabletop RPG that can be played using Mythic Legions figures, some dice and your imagination" is simple, but looks like it would be fun - especially since the rules specifically tell you to act out the battle scenes! Clearly the bonus set of trading cards and the mini print aren't included with the PDF - those will have to wait for the physical book to ship.

The Mythic Legions art book isn't quite as awesome as we expected, but it's still a very cool piece, and the story is worth reading. Order your own copy and bring the Legions home.