In today's review of Superman vs. Muhammad Ali, we told you that when the comic came out, Ali was no longer the champion. Neal Adams only accepted the job on the book if he could be guaranteed no deadlines, so he took his sweet time drawing it. Marvel felt okay taking a swipe.

In Amazing Spider-Man #186, Spider-Man has just been cleared in the death of Captain Stacey, so public and media opinion of him has swung to the positive. While holding a press conference and fielding endorsement offers, the following happens: 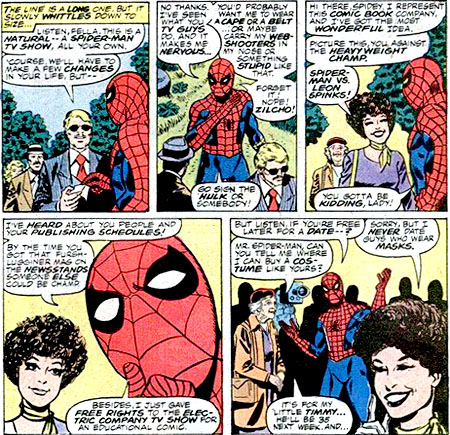 The TV bit is funny, because CBS would soon cancel both the live-action Spider-Man and Wonder Woman shows in favor of The Incredible Hulk. But what matters is the jab at DC: the woman pitching the idea to him is Jenette Khan, publisher/EIC of DC Comics. You can also find her on the SvMA cover, looking much the same as she does here.