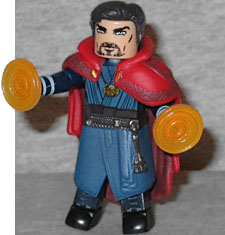 instead of science. And? "Smug guy gets humbled" is an arc that can be found in Greek myths, so complaining about it being in two movies is a little silly. Besides, it's the characters who carry the day, and other than a supernatural level of self-confidence, Stephen Strange is completely unlike Tony Stark. This Minimate doesn't really look anything like Zengelbert Bingledack in the face, but he's got the costume, so that carries the day. His Cloak of Levitation and his skirt are new molds, while the rest of the details are just accomplished via paint (and they look really nice). It's a little disappointing that the Eye of Agamotto isn't part of the cape, rather than just being a tampo, but so it goes.

There was controversy about the casting of Tilda Swinton 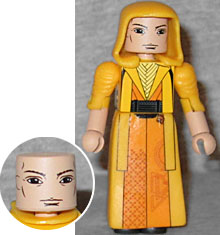 (a British woman) as The Ancient One (a Himalayan man), not the least of which was getting into a conversation that involved a question you never thought you'd hear your mother ask: "So is she shaved?"

Balancing out the budget from the extravagance of Engelbert Humptyback's new pieces, everything on the Ancient One's yellow robes is reused: long skirt, puffy sleeves, even the raised and lowered versions of her hood. Her tampographs are very complex, and actually continue around the sides of the figure instead of stopping on the front, as they so often do. The head... just looks like a vaguely friendly bald head.

The box proclaims that the set comes "with alternate hands!" which is kind of funny, since having "alternate hands" is exactly what drove Strange to Nepal in the first place. They're molded with the palms flat and small energy discs on the ends, creating shields. 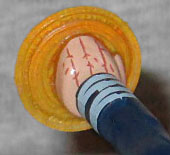 You could give them to either figure, but there's one small-but-brilliant detail that says they should be on Steve's arms. If you look at the back of the hands, there are thin tan lines painted on them. You might assume this is just an unexpected effort to make it look like he has individual fingers, but think about it for a moment: the way they're stylized, Minimates only have three fingers and a thumb on each hand (like a cartoon character); so if these were just meant to be lines between his fingers, they would only have needed to paint two of them; by painting three, it becomes clear that those are the scars that evidence the ruination of his career! Wow! We do wish there were a third hand, however, with green energy instead of yellow.