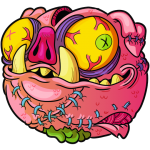 Swine Sucker won't win awards for positivity. A spineless complainer and a serial blamer, this guy also takes credit for EVERYTHING. Don't pigs already have a bad enough rep? 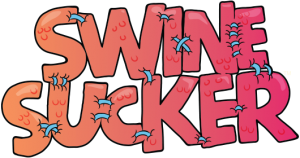 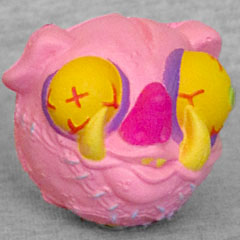 Although, that's not to say Swine Sucker is a direct copy of his ancestors. Both of the old hogs

looked rather mean, while the new one is softer and friendlier. Maybe it's because the modern artstyle has given him gigantic eyeballs, with no place for angry brows above them. For the first time, he doesn't have green snot running out of his snout, but he does retain the green left pupil that's been around since the beginning. There's a giant gash on top of his head, like it's been struck with a cleaver, and his skin has been stitched together, but is still falling apart, allowing us to see the brighter muscle beneath.