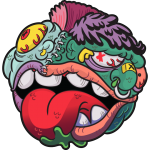 Aargh has a big mouth but nothing of value to say. His two halves never see eye to eye - and they never shut up about it. 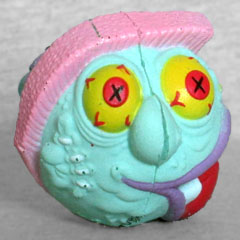 Wowie wow-wow woo! Talk about being drastically reinvented! Aargh was a character in the original '80s Madballs series, but back then he was just a blue zombie-type thing, with one bulging eye, white lips, and stitches running all over his head. This one plays up the Frankensteinism by making the character two separate faces that have been stitched together. And not just half and half, but two faces back-to-back! Creative!

The face on the right side 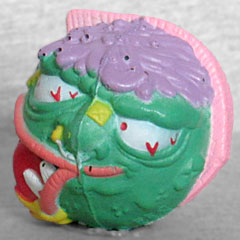 of the head has super pale blue skin with white stitches in front of his ear, deep bags beneath his yellow eyes, and all sorts of other warts and lumps. His hair is bright pink, done in a crewcut, and he has purple lips.

The face on the left side has green skin and purple hair, with a bandaid on the bridge of his nose, a ring in his nostril, and some gunk coming out of his right eye. Again, we get bags under the eyes and generally loose, saggy skin - getting stitched together must be tough and tiring! His lips are a bright salmon, and his pupils are red.

The two faces share their teeth and a single large tongue. There's a little bit of yellow drool, and the pink hair forms a mohawk. Both side-faces end up with a big parting line right through the middle of their noses, proving that the front, combined face is the one that matters. 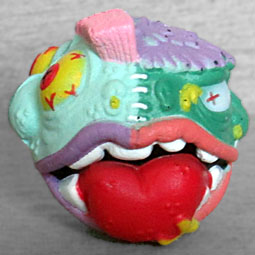 It's not clear why this is being sold as an update of Aargh and not just a new character, but whatever its name is, it's a great design.