At our standard rate of one Marvel review every Monday, I currently have enough figures waiting to carry us, unbroken, into February. So since we reviewed a Star-Lord figure today, let's review another as an addendum. 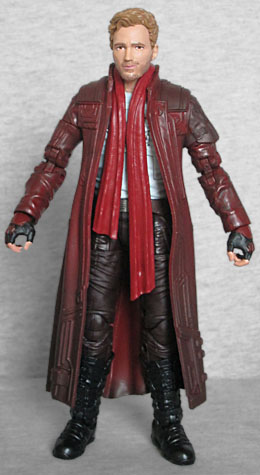 Cosmic calamity! When Star-Lord blasts into battle. It's not a matter of if things get weird, but a matter of when.

So after we spent all that time in the main review praising Hasbro for not forcing fans to double-dip, here comes Series 2, forcing fans to double-dip. Other than the arms, this figure is the same as the Series 1 figure. Same boots, same pants, same T-shirt with the same logo, all that. The arms are new because this time he's wearing his long coat, and it has different sleeves from the jacket does. He accessorizes this with a scarf, which is really pushing things into Malibu Stacy "she's got a new hat!!!" territory. This costume does come straight from the movie - he wears it when they split the party - but this is still fundamentally the same figure from Series 1. 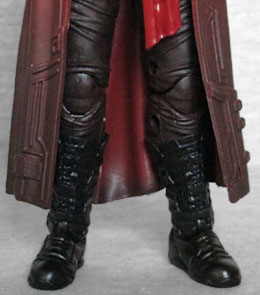 And at least the Series 1 figure was different from the 2013 toy. This one? Not so much. Long coat? Check. Gloves? Check. Hands that are not molded to hold the weapons well? Check. The design of this coat isn't identical to the GotG vol. 1 coat, but face it: a long reddish-brown coat is a long reddish-brown coat, no matter how jaunty a scarf you pair with it. I promise you, I own two different black trenchcoats, and nobody notices when I wear one rather than the other.

One good thing about this toy? It's got a new head. While the Series 1 figure was intense and serious, this one has a perfect Star-Lord smirk. The paint on this one seems to be done the old-fashioned way, rather than printed, but it still looks good. It's a terrific sculpt, no matter what! The set doesn't include a masked head, but you can swap it over from the other release, if you want. 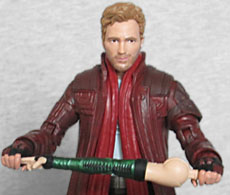 Series 2 Star-Lord has the same guns and Walkman as Series 1 Star-Lord. Though the legs still have the pegs where the guns can attach, they don't fit under the coat very well. You don't have the option of skipping this figure, because he also comes with the right arm of the Series 2 BAF, Mantis.

At least in Series 1, Star-Lord didn't have a BAF part, so you didn't have to buy him. While that isn't as much of a possibility in Series 2, Scarf-Lord is different enough from the other figures that it isn't too annoying to get him.

This entry was posted in addendums, blog exclusive review, Hasbro, Marvel and tagged Guardians of the Galaxy, Marvel Legends. Bookmark the permalink.