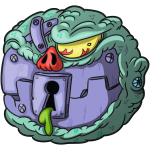 Lock Lips is a wrecking ball turned up to 1000. Suave with a polished metal swag but with a brain as dull as dishwater. At least that helps in keeping secrets. 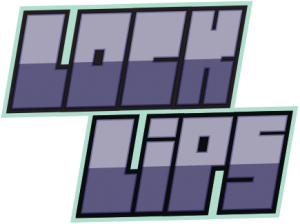 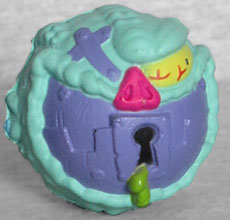 The modern Lock Lips is quite different from his forebears. In the '80s and '00s, Lock Lips was some kind of zombie or something, with a padlock drilled into his teeth and a metal eyepatch over his right eye. Okay, fine. The new one, though... well, he still has the red pig-nose, but that's about the only carryover. The covering on his eye is now just a pair of steel bars crossed in an X, and his mouth is entirely metal. Giant metal teeth like he's about to fight James Bond. There's a keyhole right in the center of the mouth, and drool coming out of it.

The original Lock Lips was a nice vibrant green, but this one is a soft teal,

like the color of an elementary school classroom. Why the downgrade? He looks less threatening now. Rather than one weird ridge running back over the top of his head, he now has three, and he's also got tiny ears now. The biggest change, however, is that instead of a hinge bolted into the back of his head, he's got a key! The key for his mouth! It's hidden on the back of his head, and it's been there so long that the skin is growing over it. That is a great, gross detail!