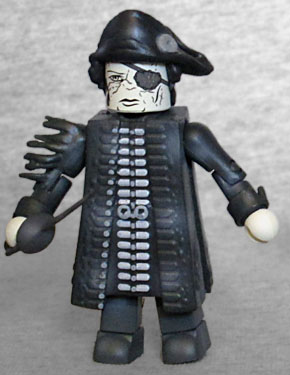 So hey, apparently that new Pirates of the Caribbean movie came out at some point. Who knew? Well, presumably DST knew, because they have the license, which is why there are now Pirates Minimates. While all the main characters are available in the regular line, this Toys Я Us exclusive offers us a member of the supporting cast, Lesaro. In the film, he appears to be the first mate of Salazar's ghost ship the Silent Mary (he mans the wheel and speaks to the captain). As a ghost, he's done all in tones of grey. His hat is torn away on one side, and his long coat, with all its buttons, is a new mold. His right upper arm is a new mold, with the tatters of his clothes floating away from it. His face is painted with the cracks and holes seen on the actor's makeup, and he is armed with a sword. 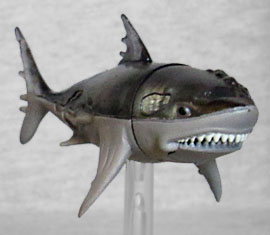 It didn't really matter who the first figure in this set was - sure, I would have preferred someone more interesting, but I was down for this pair as soon as I saw it came with a Ghost Shark! Heck, there are three of them in the movie, I'd have bought a set that was nothing but two ghost sharks. And then I'd have bought a variant pack that was one of those ghost sharks paired with the third ghost shark! More ghost sharks! This one's a cutie, though! It's molded from translucent grey plastic, to make it look ghostly - an effect undercut somewhat by the solid gray paint on its belly. The shark is molded with holes in its skin, gross cancerous lumps, torn fins, 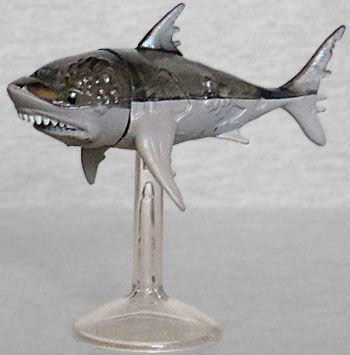 and a deep horizontal divot in its head - all exactly as seen in the movie. Poor little sharky, how did you hurt your head like that? What happened? The set includes a new hover stand for the shark, and it has only a single point of articulation: a balljoint where the head plugs on.

I don't care at all about Lesaro, but he'll look nice with Calico Jack's Pirate Raiders. Not every TRU is carrying the Dead Men Tell No Tales Minimates, and at those that do, this set is the first to sell out. Because Ghost Shark!

This entry was posted in Art Asylum, MMMR and tagged Minimates, Pirates. Bookmark the permalink.